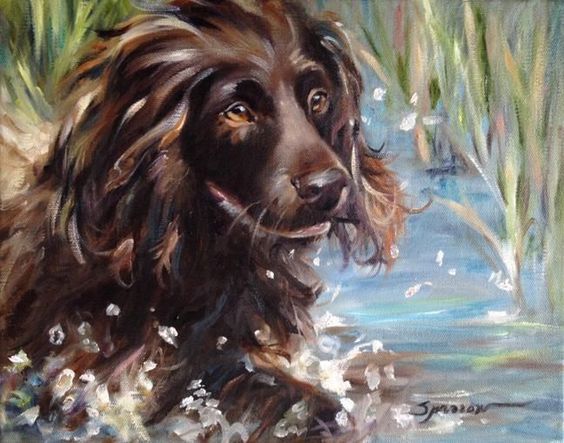 As hunting dogs, Boykin Spaniels work with far less “hoopla” than some other spaniels. S/he will quarter a field at a steady, moderate pace within gun range enabling this upland specialist to hunt all day. Efficiency personified, a Boykin doesn’t waste energy when searching for birds to flush. Rather than charge into a flush like a bull in a china shop, s/he will hesitate until the bird is located through sight or scent, then force the bird into flight with an aggressive flush.

This hesitation is a natural tendency. It’s called a “hesitant flush, or an “old English hesitant flush,” and it comes from the breed’s inclination to be precise when putting a bird to wing. This serves the hunter by providing enough time to get into position to take a safe and effective shot. Some hunters, however, are unfamiliar with the “hesitant flush” and mistake it for pointing. It’s not. The dog will range ahead of the hunter, then pause and look before acting. A Boykin leans towards perfectionism, one might say,  and s/he won’t flush a bird until s/he is sure of himself.

Some describe the Boykin as more of a hunter’s dog than a trainer’s dog, probably because this breed doesn’t take well to repetitive training necessary for exercises like an advanced blind retrieve. They are ideal waterfowlers and retrieve naturally, but rely on their nose and brain, Coupled with tenacity and exuberance, the Boykin is an upland master.

Speaking of master, a master Boykin, which is to say one that is experienced and field savvy, will even sit once the bird takes flight, and while the dog might reposition him or herself to keep eyes on the quarry, s/he won’t break (move)  at the report of the gun, nor will s/he start the retrieve until the handler gives the signal.  When trained to be retrievers first, Boykins can bring back any and every bird a hunter shoots.