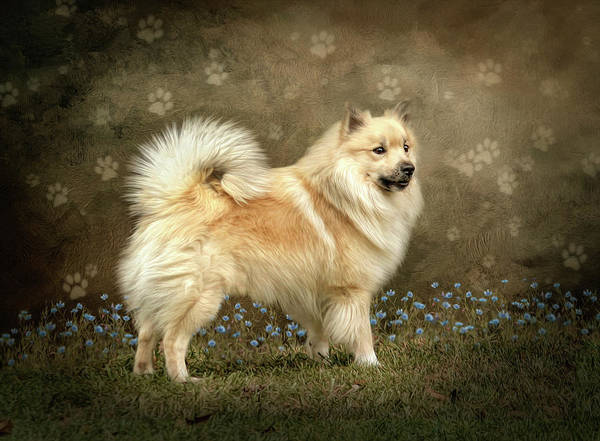 On the way to researching the Iceland Sheepdog’s name, we learned a few interesting things about Icelandic names for people. Wildly off topic, we know, but learning about a dog’s history inevitably leads to learning about the culture in which it lives.

Did you know, for instance, that Icelanders don’t have family names?  The naming system in the country is a paternal system in which a father gives his children his first name as their last name, and adding “son” if the child is a boy, and “dóttir” if the child is a girl. Parents might also choose the matronym, instead. Heiðar Helguson, a popular footballer, goes by his mother’s name: Helguson, son of Helga.  This system means that a family member will have a different last name to both parents and their siblings of a different gender. In fact, taking on a new family surname like Jones or Smith was banned in 1925, and is rigidly enforced today.

Iceland also has a naming committee that approves or denies names that have never been used in naming a child before. A committee of lawyers, professors in the Icelandic language and other qualified scholars gather once a month and go through all the applications to make sure that a proposed name won’t cause the child harm or difficulty, that boys are given male names and girls are named female names, and that the name must follow Icelandic grammar rules and adjustments. As an example, the name “Pedro” was rejected because no Icelandic name ends with an “O”. However, “Pedró,” spelled differently with an Icelandic “ó”, was approved since it can be declined correctly. Just for fun, here is a list of approved boy names in Iceland.

Upon marriage, women don’t take their spouse’s last name because it doesn’t make any sense. A woman cannot just become somebody else’s son.

Technically, there are no last names, so Icelanders refer to each other simply by first name. Something like a phone book is alphabetized by first name, and to reduce any confusion, telephone directories list professions, as well.

As Iceland sees it, the purpose behind strict naming policies is to protect Iceland’s cultural heritage, and language is regarded as a basic element of the national identity.

As interesting as all that is, it offered little clarity in explaining why Iceland’s only native dog breed, the Icelandic Sheepdog (Ísländshunden in Icelandic) is sometimes called the “Friaar-Hound.”

The Iceland Dog is believed to be a direct descendant of the dogs that the Vikings who colonised Iceland in 874 A.D brought with them.  Vikings, indeed, the entire ancient Scandinavian population, spoke Old Norse, a language that is now extinct. We know that Fårehund is Icelandic for sheepdog, but might our difficulty in pinning down the meaning of friaar-hound stem from the word having come from a now dead language?

The breed has been known by many names, including Iceland Spitz, Iceland Dog, Dog of the Vikings, Íslenskur fjárhundur, Islandsk Farehond, and Canis islandicus.  Most of us can piece together the interpretations of those names, but friaarhound eludes us. The closest we’ve come to an explanation doesn’t really explain the word at all other than that according to one source, the Icelandic dog was introduced to Iceland by the Norwegians, and it was they who called it the friar/friaar. If any of our readers have any insights into this word, we’d love to hear them.

Meanwhile, it’s a comfort to know that a breed that came so close to extinction is now protected by the Icelandic Dog Breeder Association (Hundaræktunarfélag Íslands or HRFÍ). The Icie and its way of working sheep and horses was so well adapted to the local terrain and pasturage that Icelanders struggling for survival for hundreds of years came to regard it as an essential pasturage herder. In that regard, it is a part of the cultural identity.  From a cynologists viewpoint, the Icelandic Sheepdog formed the basis of the Border Collie and Corgi breeds, and possibly the Shetland Sheepdog’s as well when the breed was taken to the British Isles

Image: Iceland Dog by Maggy Pease is available for purchase as fine art, and in home decor and lifestyle items here.

4 thoughts on “The Icie’s Mysterious Name”