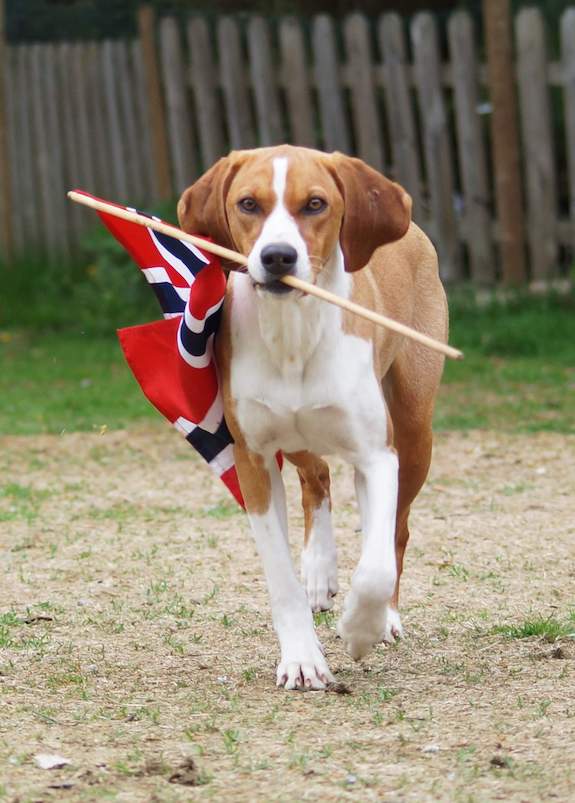 Have you ever looked at a word and thought it said something else, something that made you chuckle?

At first glance, we marveled at the clean sound of the Hygienehund’s name, only it wasn’t Hygiene, it’s Hygenhund. Our momentary dyslexia didn’t improve as we scanned the rest of the page (too quickly, as it turned out) and read that the dog had been created by a devoted scent hound breeder named Hans Fredrik Hygen who used German Holsteins in developing the breed. Holsteins? As in cows? Now this was a breed we wanted to meet. A hygienic dog that could moo.

Hygen’s goal was to produce a hunting breed that had the stamina and determination to pursue game in the harsh conditions of the Arctic region, and he succeeded his own expectations.  Hygenhounds are highly valued in Norway for their dignified and equable temperament, but especially for their work ethic and staying power, experts in trekking and retrieving.

There is a downside to wanting one of these dogs. They’re rare. And to the breeder falls the challenge of maintaining a robust gene pool.

According to the Norwegian Harehund Federation, the overall breeding goal for the breed is, of course, to preserve breed soundness, but also to have as wide a breeding base as possible based on given conditions. Between 2000-2012, a total of 457 Hygenhund puppies were born and registered, an average of approximately 35 puppies every year, and that is a scary low number to maintain a breed moving forward. According to an article by newspaper Aftenposten in 2012, the Hygen Hound is one of the six Norwegian dog breeds at risk of extinction.

The federation determined that in order to maintain the close breeding rates at a reasonable level, at least 40 pups needed to be produced annually from several breeding lines. For obvious reasons, then, the Hygenhund is under a strict breeding program, and its standard specifies that it cannot be reconstructed from other breeds, so fanciers are being careful to maintain breed numbers as well as the fine qualities of this breed.