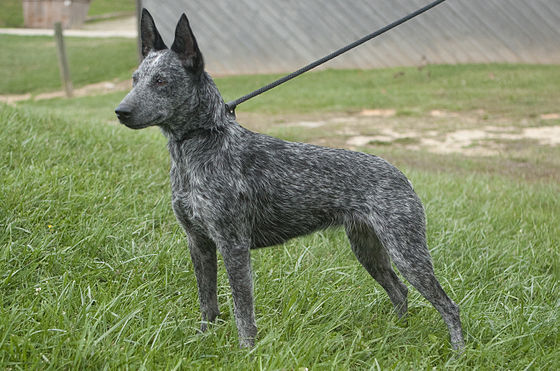 News flash! The difference between an Australian Cattle Dog and the Stumpy Tailed Cattle Dog is (wait for it) – the tail!   But you know us, nothing is as simple as all that. These are two distinctly different breeds that have in common an origin (Australia), their job (herding and stock control), a bit of history, and a work ethic (work until they drop).  The Stumpy Tail, however, is squarer with a shorter back, a lighter body,more wedge-shaped head, and longer legs than the ACD  (their length of leg is more like the dingo’s so as to allow the distance from the elbow to ground to be more than half that from the withers to ground). This influences the breed’s gait insofar as it having a tendency towards a more rotary action of its hindquarters, and ambling at a slow speed. With more angulation, the Australian Cattle Dog has a greater length of stride. A Stumpy’s ears are almost pointed, set higher on the head than the ears are on the Australian Cattle Dog, and are wide apart.  Also, Stumpies cannot have tan points.

One will find varying opinions on the suitability of a Stumpy Tailed Cattle Dog as a general farm dog. Some sources like to remind us that in the breed’s history came some crossbreeding wild dingoes which are known to scavenge like a wolf.  This can lead to problems when the dog is around smaller animals such as chickens, ducks, cats or lambs. Others refute this and claim that all dogs need to be trained.  There is little disagreement that this is a tough breed, but a marvelous one when in the right situation.

An interesting insight into the breed’s appearance in the United States comes via American soldiers who’d been in the Pacific during World War II and stopped over in Australia for “R & R” on their way home.

Once home, these men quickly realized that their livestock had become quite wild. A few of the former soldiers who’d seen “blue and red heelers” working stock in the outback believed they would be an asset on their ranches and imported a few heelers for themselves. The first groups of imported dogs included both “Stumpy Tails” and “Australian Cattle Dogs” because in Australia, both breeds were often simply referred to as heelers, and logically, that’s what the Australians sent over.  There was no registry for either breed in the US at the time, and in the end, the Americans just wanted tough working dogs to control their stock.

The breed is recognized by the Canadian Kennel Club,  FCI (Fédération Cynologique Internationale), and the New Zealand Kennel Club.

Image of an Australian Stumpy Tailed Cattle Dog by Wendy Hodges and shared under the Creative Commons Attribution 2.0 Generic license of Wikipedia

172 thoughts on “The Stumpy Tail v the Australian Cattle Dog”