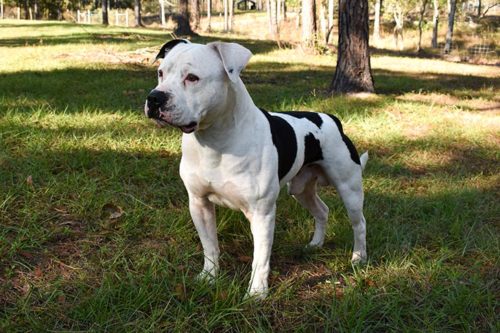 The American Bulldog added to the AKC Foundation Stock Service in 2019 traces it’s roots to the original Bulldogs that survived as farmers’ catch-dogs in parts of Southeastern United States. Those dogs were descendants of the now-extinct Old English Bulldog, but by the end of World War II, the American Bulldog was on the verge of complete extinction

The breed was revived by the efforts of two breeders, John D. Johnson and Alan Scott, both regarded as the “architects” of today’s American Bulldog.  In 1970, Johnson first registered the American Pit Bulldog with the National Kennel Club (he would later switch over to the Animal Research Foundation),  but later, renamed it the American Bulldog to avoid any confusion with American Pit Bull Terriers which he regarded as an entirely different breed. Even before then, however, the breed had been known by a variety of names owing to their region. As such, the Hill Bulldog, Country Bulldog, Southern White, White Bulldog, and White English Bulldog all referred to the same breed.

Scott and Johnson went on to developed two distinct lines named for them, but at one time, there were other strains within the breed named Williamson, Bailey, and Tate, each line from bulldogs out of the Scott line. The distinctions between them were minor, and the primary lines were the Scott American Bulldog and the Johnson American Bulldog.

Early on, however, Scott and Johnson had similar dogs, all Old Southern Whites.

“Mac the Masher” was Scott’s foundation dog, while “Dick the Bruiser” was Johnson’s, and pair began a breeding program together.   Johnson, however, favored “bullier” looking dogs (some call this look the “classic” type) that had a wide chest, boxy head, and undershot bite. It hinted at an English Bulldog, and it would because Johnson had crossbred one of his old “Johnson” type dogs with a northern English Bulldog.

Scott’s type, however, more resembled the American Pit Bull Terrier. A product of breedings between dogs from Southern farms and an old Johnson type Bulldog, the Scott dogs had a reverse scissors bite, narrow muzzle and head, slightly dropped jaws, and far more energy than Johnson’s dogs. This lead to Scott’s dogs being regarded as “performance” type dogs, and that suited Scott just fine because he had always put more emphasis on working traits useful on a farm or woods.

Some are of the opinion that over the years, Johnson and Scott’s lines have become increasingly mixed to where there are no “pure” dogs of either strain left, though others might disagree insist that there are pure “Johnson” strain dogs remaining.

In the 80s, the American Bulldog started a slow comeback that has picked up steam, and in 1998, the breed earned full recognition with the United Kennel Club.