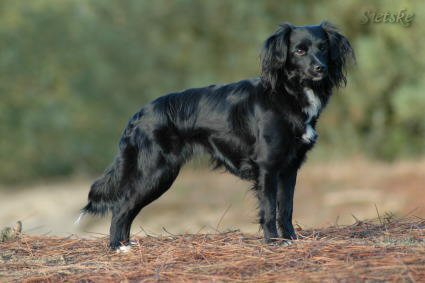 Throughout history, dogs that couldn’t earn their keep were useless to common men – and sometimes, even to nobility that kept dogs to guard their estate or hunt on the grounds of it. Exceptions were made for small lap dogs that provided comfort and company to queens, princesses, and the like, and their children.

Dutch aristocracy was no different, and a breed called the Markiesje fit the bill. Though the Markiesje has the instincts to be a retriever and gundog, its size – (up to 16 inches tall and 13 pounds) makes either of those pursuits impractical. This is a dog that can fit into a basket, and there are those who wonder if the breed’s name (pronounced Markees) may actually have come from the Dutch “markiesje,” a small reed basket with handles. As the fabulous dog writer, Ria Horter, points out, however, the French word for a pointing dog is marqueur, and since a bitch named, ‘Pom’, the “foremother” of all present Markiesjes in the Netherlands originated from France, perhaps the name is linked with that French word.

Some have speculated that the author of a dog encyclopedia, namely Toepoel, P. M. C., got the name from the French nobility title  “marquise,” while others theorize that King Louis XV’s mistress, the Marquise de Pompadour, unwittingly provided the breed its name when she was painted by Francois Boucher with a little Markiesje-type dog at her feet.

We may never know with certainty as there were very few records kept in regards to the breeding of these companionable little dogs. Suffice it to say that whatever the origins of its name, this elegant little companion dog makes a fine companion to families, the elderly, and even for people who want to pursue a dog sport since its liveliness makes it game to do agility, flyball, and even tracking.

The breed was officially accepted only by the Dutch Kennel Club in 1999, but the Markiesje remains unrecognized by other major kennel clubs, including the FCI. The dogs can be entered in the appendix of the Dutch Stud Book, but the Stud Book remains open. As authors, Janny Offereins and Diana Striegel point out in their wonderful book, Amazing Dutch Dog Breeds, this means that “specimens which resemble the Markiesje can still be assessed and subsequently entered in the Markiesje register,” this in the hopes that the gene pool is increased and the temptation to inbreed is reduced.