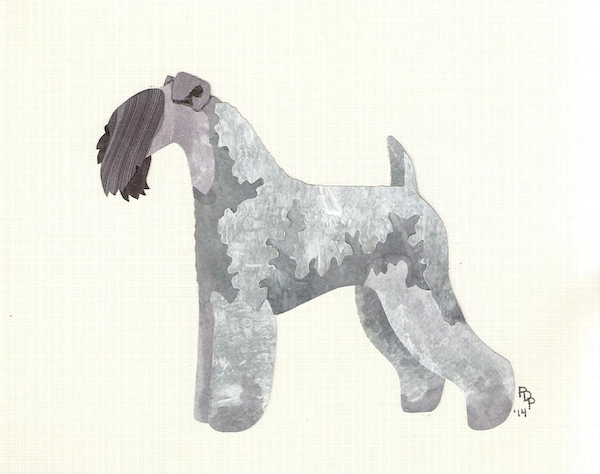 The Roaring Twenties in America was certainly a time of dramatic social and political change. For the first time, more Americans lived in cities than on farms. The country’s total wealth more than doubled between 1920 and 1929, and many people found they had a little extra money to spend. The Jazz Age arrived. Women could finally vote. Mind you, the average American woman wasn’t the wild, free-wheeling-devil-may-care flapper often portrayed in movies, but she enjoyed a freedom her predecessors hadn’t.

Yes, the decade had its issues, and for some people, there was more conflict than celebration. That said, the first trans-Atlantic phone call, the first movie with sound, the first affordable automobile and appliances, Lindbergh’s solo flight across the Atlantic, the discovery of penicillin……….and……..the introduction of Kool-Aid, Reese’s Peanut Butter Cups, Velveeta Cheese, and Baby Ruth Candy Bars, all happened in the 20s.

It was a good decade for the Kerry Blue Terrier, as well. The breed first appeared at the Westminster Kennel Club dog show in 1922, and two years later, it was recognized by Britain’s Kennel Club and the AKC. Some breed historians believe the breed peaked in popularity in those ten years when a full 25 percent of Irish Kennel Club registrations were for the Kerry Blue, an astonishing number for any one breed. In Ireland alone, there were four clubs dedicated to the breed known locally as the Irish Blue Terrier.

At the time, the British Kennel Club licensed all dog shows, so one can imagine the shock when a bunch of fanciers calling themselves the Dublin Irish Blue Terrier Club held its own show on October 16, 1920. Equally bad is that they held the show outside of curfew hours imposed by the English. Even worse? When they held their show on St. Patrick’s Day the following year, the English Kennel Club Show was taking place on the same day.

Kerry owners know all too well the story of Michael Collins,  a member of Dail Eireann (Irish Free State), and the director of arms procurement for the Irish Republican Army.  He was leading the IRA’s military campaign against the British presence in Ireland, but had been the eighteenth person to register a dog with the Dublin Irish Blue Terrier Club. At the time he exhibited his Kerry Blue Terrier named, “Convict 224” at that first show, Dublin Castle had offered a bounty of £10,000 (over $12,000 USD today) for any information leading to his capture or death.

It’s always been said that dog show people are a little crazy.

The success of that show spurred the foundation of the Irish Kennel Club in 1922.  The same freedom fighters who drove the club’s foundation reached across the political aisle by electing independence opponent, justice, and dog lover, Henry Hanna, as its Chairman. It wasn’t a surprise to anyone that the first breed the club recognized was the Kerry Blue Terrier.

“Often the position of the Irish Kennel Club is misunderstood. Some fanciers regard it with the natural hostility of an Irishman to any government. It is forgotten that the democratic foundation of the Irish Kennel Club is the specialist clubs, without which it cannot legally exist. They control it. They are its constituencies from which the representative delegates are provided….We humbly think that the footprints we are leaving behind may encourage other Irishmen to believe that they need not be dismayed to have any burden thrown on their shoulders, if they, as we, with honest endeavor and goodwill, join hands in a united effort. Having laid the foundation, we now propose to build a worthy superstructure.”

Since that first show on St. Patrick’s Day,  there has only been one dog show held on St. Paddy’s Day in Ireland, and it has been run by the Irish Kennel Club.

We end on a dispiriting note.  The breed went from being a quarter of all Irish Kennel Club registrations in the 1920s to its current position on the UK’s Kennel Club’s “vulnerable native breeds” list established in 2003.  Breeds registering fewer than 300 puppies per year are considered vulnerable, and in 2021, only 156 Kerry Blue Terriers were registered, a drop from the year before.

As noble as it is to acquire a rescue dog, it is nothing short of saving an entire breed from extinction to own a vulnerable breed if the breed is determined to be a good fit. The website for the parent club in America provides a section on how to adopt a “rescue Kerry,” as well as finding a Kerry for placement. When you’re ready for a new companion, consider a Kerry Blue.

Image: Kerry Blue Terrier created from 10 to 20 individually hand cut pieces of paper in a variety of colors and patterns, combined in layers, then mounted on color stock, by Patricia Peters – CanineCutUpsiah
https://www.etsy.com/shop/CanineCutUps