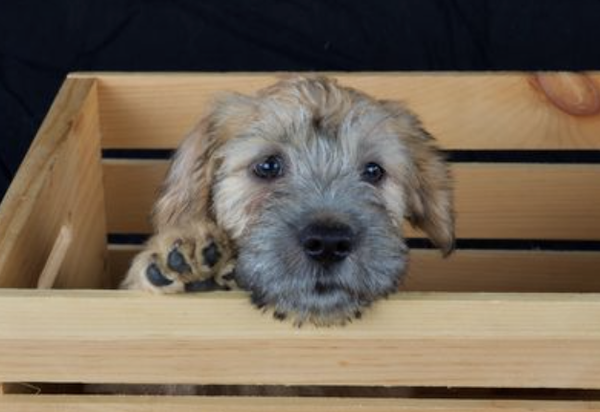 A breed legend is not always appreciated by fanciers of the breed, especially if it’s dated, untrue, or still up for debate.

We learned the hard way, for example, that mentioning a particular breed’s historic nickname – one that was earned for the dogs’ reputation as a child’s playmate and guardian –  is now strongly frowned upon. We live in very different times than when the nickname was created, and we honestly understand.

The Glen of Imaal Terrier has also been associated with a breed legend. As a sturdy, low-slung terrier standing no more than 14 inches at the shoulder, Glens have been described as either having been actual descendents of turnspit dogs, or being close relatives (for readers unfamiliar with the term, turnspit, we ask you to imagine a hamster wheel large enough for a dog. Turnspits were essentially dog-operated rotisseries). As of 2017, the AKC made mention of the Glen of Imaal Terrier “turnspit” legend,  but increasingly, similar references are hard to find in more timely material.  The work of Glens as prodigious badger dogs is well documented. As turnspit dogs?  Maybe not as much.

It doesn’t keep some owners from having fun with the narrative, and we have Kelli Whitfield’s gracious permission to share a couple of fun videos she put together. They not only do a nice job of illustrating what the breed looks like, but also show that the Glen of Imaal Terrier is highly trainable!

We focus on this next video for a particular reason, and that is because it includes two Glens:

We find this last video particularly timely because of the backstory we came across regarding a popular expression still in use today.

Back in the day, a turnspit dog couldn’t be expected to maintain the energy and stamina required to turn a wheel two days in a row, so in a typical household, two dogs were kept for this purpose, alternating days between them. After a while, the dogs came to know which was ‘their” day, and they’d hide. By many accounts, this gave rise to the expression, “Every dog has his day.”

Image: Photo of baby “Maguire” by the kind consent of Kelli Whitfield