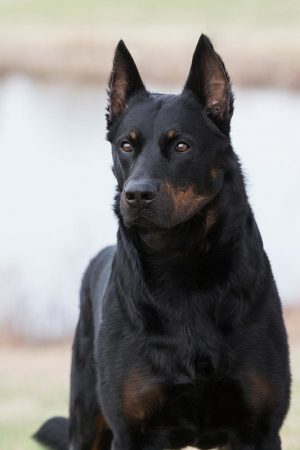 Google “living fence” on the Internet, and you’re apt to get thousands of hits on ivy, holly, cypress, and any number of espaliers. Our use of the term, however, refers to something with four legs that’s decidedly less green in color: Herding breeds that act as “living fences.”

This is a European concept that was already being used in the open fields of Central Europe as early as the 1400’s. Certain herding breeds are unique in that as they take a flock from its pen to a pasture or unfenced grazing field, and keep the sheep in line by trotting along the edges of the flock and becoming, in essence, a moving fence that keeps hungry sheep out of forbidden areas.

This sort of tending allowed for grazing on the sides of roads, alongside planted crops, fallow fields, and areas where conventional fencing didn’t exist. Should a sheep wander away from the acceptable area, the dog instantly put the sheep back where it belonged.  When grazing was done, the dogs were expected to pull sheep from the plot, line them up behind the herdsman, and on the way home, keep them out of flower beds, crops, and vegetable gardens, as well as out of traffic, and across bridges in a safe, orderly manner all the way back to the sheepfold.

These dogs are also known as “boundary herders.” Several breeds have excelled as this role, including German Shepherd Dogs, Bouviers, Briards, the Belgium Sheepdogs, and the Beauceron, a classic “Continental” or “tending” worker. In its rustic setting, a Beauceron often had to move a flock or herd 30 miles a day, and did so by relying on the “Beauceron trot,” an extension of its normal trot in which its back became lower, its legs extended, and his or her feet barely skimming the ground.  As with the other continental herders, the Beauceron has very strong protective instincts, but in some circles, the Beauceron is called “the king of sheepdogs.”

7 thoughts on “The King of Sheepdogs, the Living Fence”