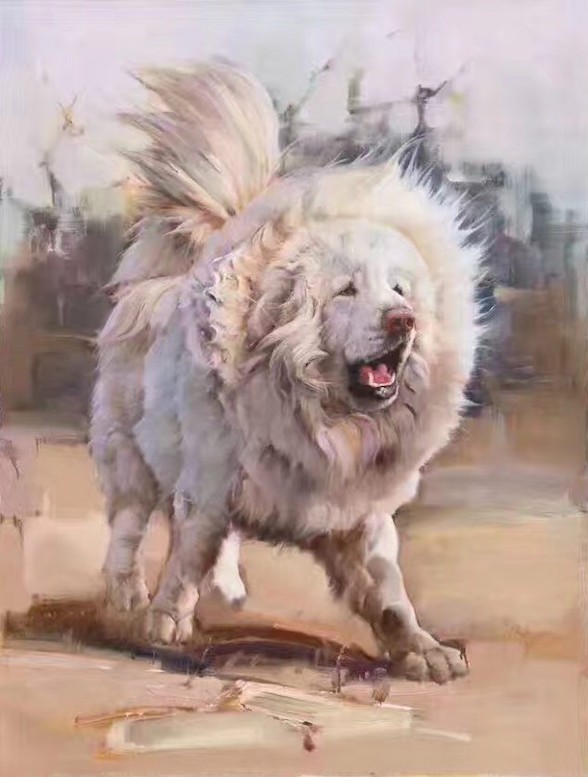 In 1800, a cadet and English Asiatic traveller with the East India Company, Captain Samuel Turner, mentioned the use of “huge dogs” in his memoir,  An account of an Embassy to the Court of the Teshoo Lama in Tibet. He wrote:

“The mansion stood upon the right; on the left was a row of wooden cages, containing a number of huge dogs, tremendously fierce, strong, and noisy. They were natives of Tibet; and whether savage by nature, or soured by confinement, they were so impetuously furious, that it was unsafe, unless the keepers were near, even to approach their dens.”

Forty-seven years later, the breed still didn’t have an actual name, a fact we know from a record of the first such dog from Tibet imported to England and gifted to Queen Victoria. The canine given to the Queen from Lord Hardinge, the Viceroy of India, was only referred to as “a large dog from Tibet.”

Truth be told, the dog so closely related with daily life of Tibetans didn’t have a unified name in Tibet, either.  Some called it “Dorqu” or Zhoqoi,” others called it “Zhago,” “Lhawo,”or “Biqoi,” and the names were basically generic words describing a “bound dog,” “watchdog,” “shepherd dog,’ or “mastiff fed by herders.”

In 1873 when England’s Kennel Club was formed, the breed was officially entered into the Stud Book as the Tibetan Mastiff, leaving behind its earlier title as, “large dog from Tibet.”