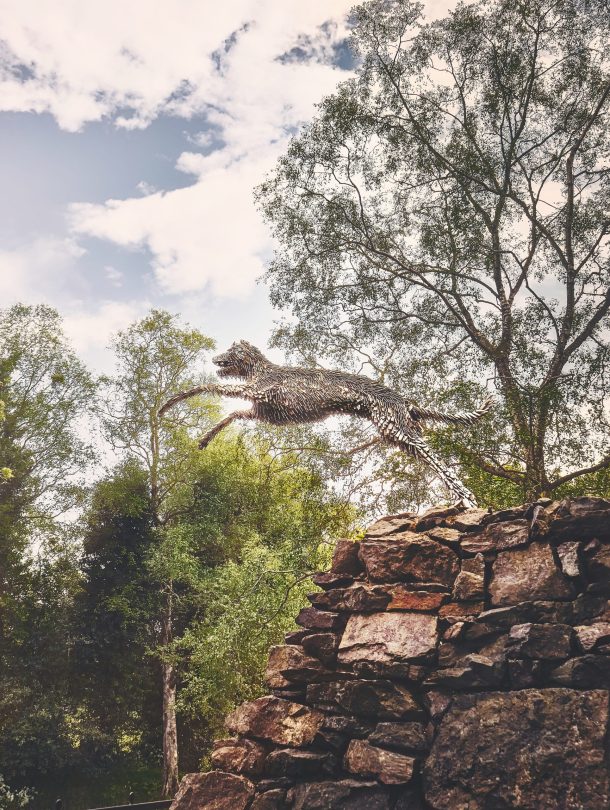 “O’Cahan’s Lament” is one of the most recorded melodies ever composed. You’ve probably heard it many times and not given any thought to what it meant. On that score, there are dozens of theories that range from the song being a message from a parent to a son going off to war, to the music being a simple song of Irish national pride. If you don’t recall ever hearing “O’Cahan’s Lament,” it’s because you know it better by a different name. The name becomes apparent as soon as you hear it:

Many musicologists think that “Danny Boy” has to do with Sir Donnell O’Cahan, a member of one of the most ancient and powerful clan in the north of Ireland, the O’Cahans. You’ll learn more about Sir Donnell further down.

The stronghold for the O’Cahans was O’Cahan’s Castle in Limavady in Northern Ireland. The clan enjoyed undisputed rule over this area from 1122 until 1260 when they were defeated by the Normans, and it would be over a hundred years before the family regained power, but they did. Trouble, however,  came again in 1607 when Sir Donnell O’Cahan was implicated in treason and had his lands and titles confiscated.He escaped to mainland Europe at at the time of “The Flight of the Earls,” an episode that many believe inspired the song, Danny Boy, originally called ‘O’Cahan’s Lament.’  Several sources say the lyrics were penned by an Englishman, but there is little dispute that the tune was jotted down by Jane Ross who lived in the market town of Limavady. Jane jotted down the tune while hearing it being played outside her window by a blind fiddler. As an aside, the name “Ross” is still common in the area, and visitors come to Limavady just to walk the same roads as Jane.  Once a year the town even holds a Danny Boy festival. 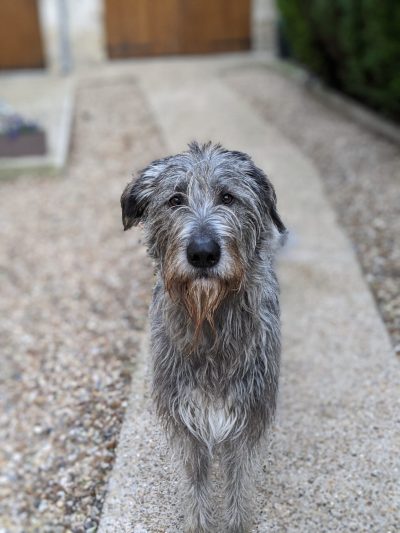 We have two reasons for mentioning the O’Cahans, the first which is admittedly to share a bit of musical trivia. On these pages, however, it always comes down to a dog. In this case the two are connected.

As we mentioned earlier, O’Cahan’s Castle was situated in Limavady, a name of Gaelic origin which means Leim an Mhadaidh, or “Leap of the Dog.” The castle sat in what is now the Roe Valley Country Park through which runs the River Roe. Both the O’Cahan clan and the river factor into the legend of one very loyal and clever dog, an Irish Wolfhound.

As the legend goes, the O’Cahans were under siege by their enemies, and desperate for reinforcements, they sent their faithful Wolfhound to deliver a call-for-help message. In full lope, the Wolfhound leapt across the swirling and treacherous currents of the Roe river, his silhouette cast against the rising sun to get the rolled up piece of parchment he clenched in his teeth to the people who could help. In the end, the mission was accomplished, and the O’Cahans’ stronghold was secured. The family maintained power and influence until the 17th century when Sir Donnell, the last O’Cahan chief, was imprisoned for the aforementioned treason. He died in the Tower of London in 1628, his land given to Sir Thomas Phillips who founded Newtownlimavady.

The Dog Leap legend is so famous that several hundreds of years later, the celebrated sculptor, Maurice Harron, crafted the ‘Leap of the Dog’ sculpture which now graces the Roe Valley Country Park. It is said that many Wolfhounds – perhaps the origina’s progeny? – still populate the valley, and every one of them, it’s said, is stubbornly determined to save not only the O’Cahans if need be, but the whole of Ireland. Maybe the planet.

If you are so inclined to celebrate the Dog’s Leap, and you have a taste for distilled nectar, you may want to know about Limavady Distillery. From 1750 to the 1910’s, it was in the thick of the thriving Irish whiskey industry, its calling card a signature Single Malt. In the early 19o0s, the distillery, like much of the Irish whiskey industry, suffered from world war, domestic civil unrest, and America’s temperance movement. The distillery was shut down not long after, but its legendary malt lived in memories, and in a small bar just outside the market town itself, a new Limavady was born. It’s now touted as Ireland’s single greatest barrel Irish Whiskey. That’s the good news. The bad news (“bad” being relative) is that you’ll probably have to go to Ireland to have it.  ROAD TRIP.

Photo of the Dog Leap sculpture by K. Mitch Hodge on Unsplash