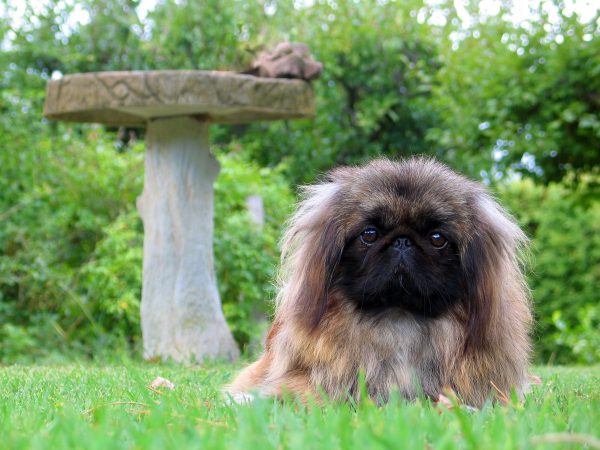 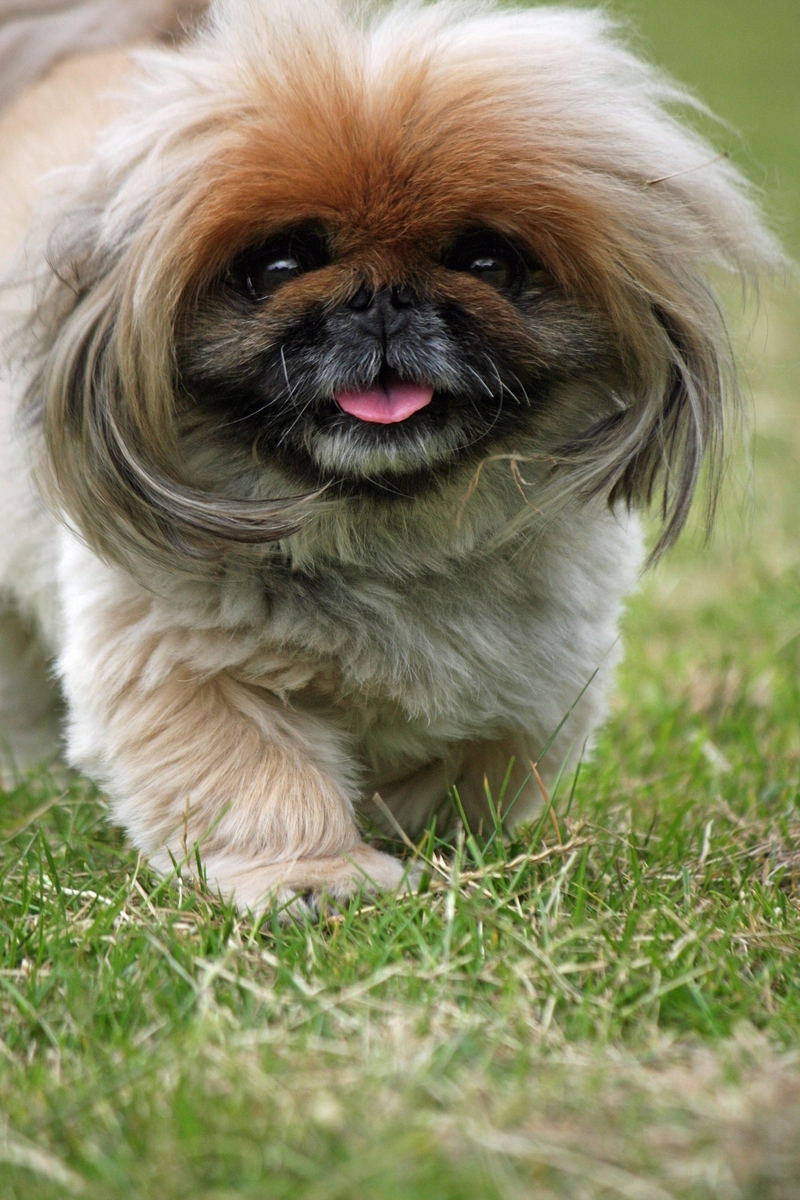 Some pet owners clip down their Peke’s coat thinking it is more comfortable for the dog in hot weather: 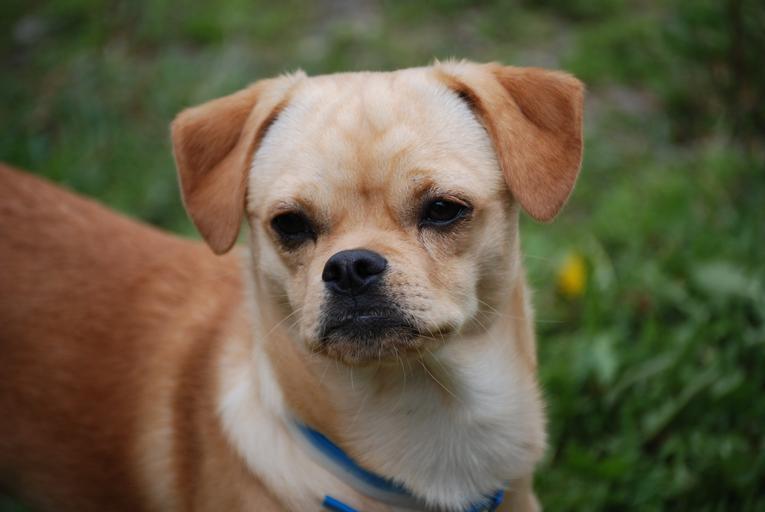 For the person who attends dog shows, a champion Peke is far “hairier” in a conformation ring; The dog below is “Malachy,” the Westminster KC Dog Show Best in Show winner in 2015: 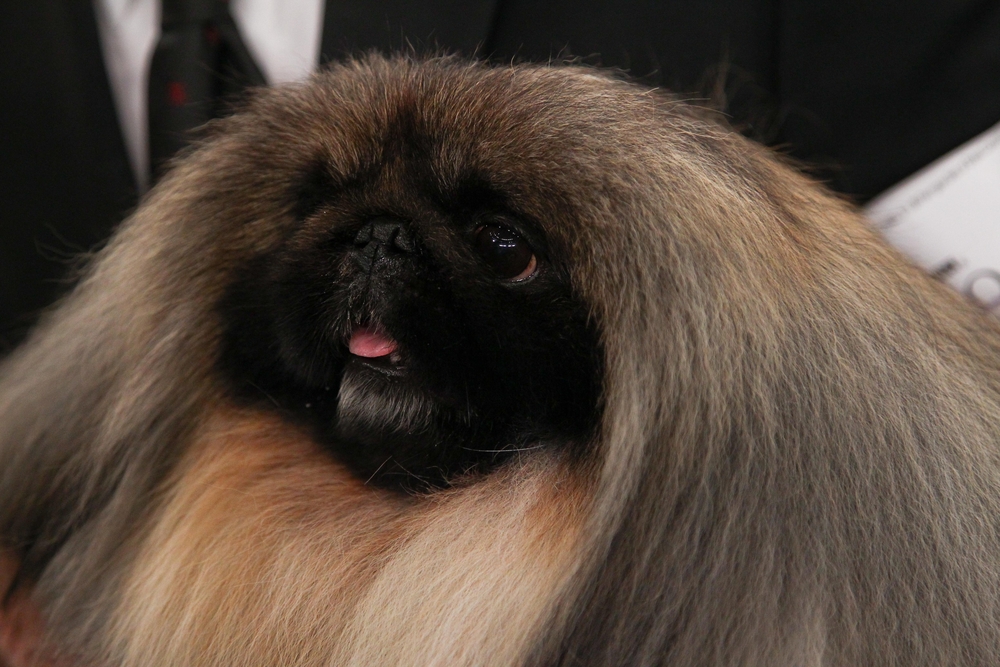 What none of these photos show is a reflection of the vision held by Dowager Empress Cixi whose breeding program had as a goal breeding dogs who resembled little lions guarding the gates of the Forbidden City. It was Cixi who refined and codified the standard for the breed when it was first established.

Some breed historians suggest that the arrival of Buddhism in China correlated with the development of the breed, and since lions were important figures in that faith (and since Asiatic tigers had long been extinct in China),  devout Buddhist monks developed dog breeds to have leonine traits such as blunt muzzles and heavy head furnishings. The Pekingese was one of them. The Peke’s coat is longest at the neck and shoulders which gives a Peke its famous lion’s mane, but the breed is also known for its “lion-like” qualities of dignity and strong-mindedness. There are those who coif and clip their Peke to heighten its resemblance to a lion, but it’s not a look many of us come across often, if at all. When we came across the photo below on a stock photo site, we had to share! 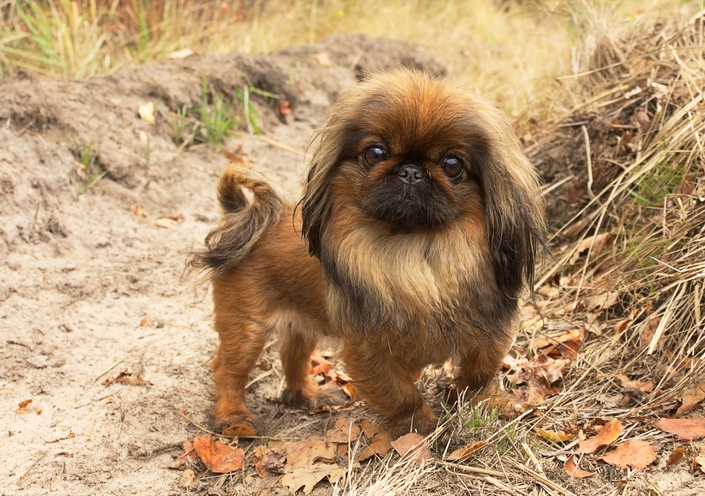 In Cixi’s day, even color was considered when fashioning a little lion dog (though it must be said that the Dowager had fashion in mind, as well). A fanciful description of the Pekingese appeared in a poem entitled, “Pearls Dropped from the Lips of Her Imperial Majesty Tzu-Hsi Dowager Empress of the Flowery Land:”

“And for its color, let it be that of the lion – a golden sable, to be carried in the sleeve of a yellow robe; or the color of a red bear, or a black and white bear, or striped like a dragon, so that there may be dogs appropriate to every costume in the Imperial wardrobe.”

We conclude with a poem by Frank Wade which again, mentions the lion:

The Fable of the Pekingese

Have you ever seen a Pekingese
With his ears a’flapping in the breeze
Like a junk-o-war in the China Sea:
Sailing out against an ancient enemy?
With his main a’top like a frigate’s sail
And the flag of battle his upturned tail:
As he trots along so near the ground
Does he even seem like a sampan outward bound?

Thats the way they always looked to me
In my childhood days when I chanced to see
Pekingese that passed my house each day—
And I wondered why they were made that way:
Why they looked so fierce, though built so small,
And they never feared anything at all
With their nose pushed back beneath their eyes,
Which were big and round but soft and wise.

Though they looked like toys they’d want to fight
All the biggest dogs that came in sight,
But they’d stop at once and start to play
If I happened to bounce a ball their way

And I asked around among grown ups
Why they were different from other pups,
There was one who knew, for he’d been to sea—
And this is the tale that he told to me:

Many years ago, there lived out East,
In a jungle land, every kind of beast;
And amongst them all, in a cave alone
A Buddhist monk had his house of stone.
With all his friends was his greatest pet:
A brown and white little marmoset,
Just a tiny monkey who looked quite frail,
With a ruff round her neck and a bushy tail.

Now this hermit wasn’t a lonely man.
From the day he arrived there he began
To preach to them all, in the jungle shade;
And one of the very best friends he made
Was a lion, who from the moment they met,
Fell in love with the monk’s little marmoset.
And the lion declared t’was his mystic fate
That the hermit’s pet should become his mate.

But the monk said this wouldn’t do at all
With the lion so big, and his pet so small,
But that she could be, for the rest of his life.
A sister to him — instead of a wife.
But the lion begged of the holy man
To think of a better and wiser plan:
And the monk replied: it was his advice
That the lion must make a great sacrifice.

As King of the Beasts, he must reign no more;
He must lose his strength and triumphant roar:
And never again must he regret
The solemn forfeit the monk had set.
And the lion swore his love was true
And all of these things he would gladly do.
“Your wish shall be granted,” the hermit said,
“And you and the marmoset truly wed.”

The monk intoned, as he cast a spell
The lightning flashed, as the shadows fell;
And all of the animals trembled to see
The lion diminishing gradually.
And smaller he got, and smaller yet,
‘Til he reached the size of the marmoset.
And tho’ feeble and small, he was quite content.
He’d won her love, and her heart’s consent.

“This is true love indeed,” cried the Saint. “here’s how
Your steadfastness shall be rewarded now —
Though you’ve lost your strength, yet you will retain
Your courage and dignity, your beauty of mane:
No hunger shall plague you, your children will dine
As guests of the great ones, in palaces fine:
And the spirits of monkeys, so joyful and free
Shall live in your offspring, as long as can be.”

This part of their life in the jungle ends
When they left the monk and their childhood friends.
**
Now more than twelve-hundred years ago,
As far back in history as we know,
The fame of their children around Cathay rang,
Where they lived in the palace of the Emperor T’ang,
Who gave them appointments of honour and wealth,
With doctors to see they were kept in good health.

Even artists made potteries, as close as two peas,
To the likeness of our present day Pekingese;
And a thousand years after, their sons sat at sea
On the lap of the Dowager Empress Tzu-Hsi.
Their dinner was shark fins, and breast of the quail;
And antelope’s milk kept them hearty and hale;
Servants brewed for them carefully, yet never in haste,
Hankow tea from the buds with the delicate taste.

And when sick, were served juice, with the greatest regard,
From the ripe custard apple — by squeezing it hard.
And to make it quite certain they’d feel less forlorn
Three pinches of shredded rhinocerous horn.
Many years passed away, but they had to remain
In the precincts of Tzu-Hsi’s imperial domain.

Then some wars came along and it seems very queer;
That’s the reason the Pekingese first landed here.

So next time you see a small peke with a friend
Pressing on like a steamboat arounding the bend,
Don’t forget all the grandeur and pomp of his past,
Of his birth and his breeding you’ve learned of at last:
Of the times when his ancestors sat down to tea
And drank the best brews on an Empress’ knee.
There’s one way to prove your good breeding, and that
Is: remember your manners — and just tip your hat