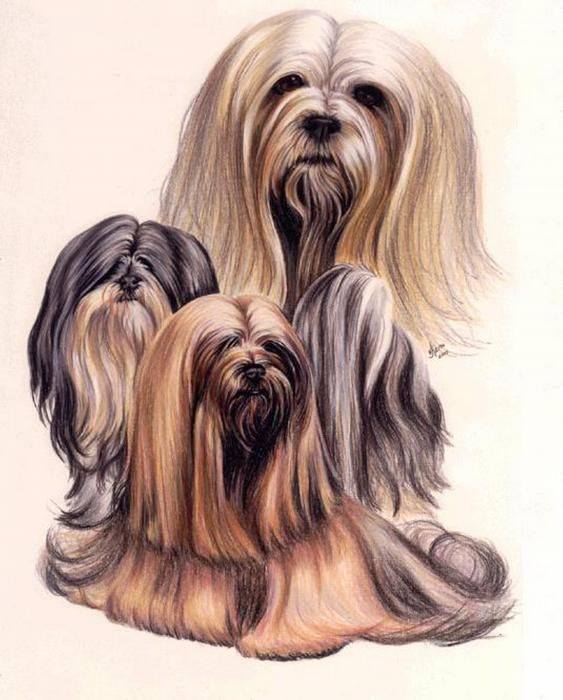 Back in the day, the breed we know as the Lhasa Apso was known as the Lhasa Terrier, possibly (and this is an unconfirmed story)  because it was believed that Lhasa Apsos were simply the “runts” in Tibetan Terrier litters. Since the smallest pups in the liter were unable to herd well, they were given to the monks to keep.

While the first standard for the breed appeared in 1897, it was in India in 1931 that a distinction was made between the Tibetan Terrier and Lhasa Apso, this according to Tamsin Pickeral’s “The Spirit of the Dog,” but in the west, the understanding of Asian breeds was a muddle (writer, Amy Fernandez, does a marvelous job of sorting this out in her article, Ancient Breeds – Shih Tzu, Tibetan Terrier, and Lhasa Apso).

The first Lhasa Apsos came to the United States in 1933, two little dogs that had been gifts from the 13th Dalai Lama to Mr. and Mrs. C. Suydam Cutting of New Jersey, their Hamilton Farms’ Lhasa Apsos extremely influential in establishing the breed in the United States. In 1935, the Lhasa Apso became the first small Tibetan breed admitted to the AKC, and was assigned to the Terrier Group as the Lhasa Terrier.  In 1945, the AKC changed the breed’s name to Lhasa Apso, but it was changed again in 1959 to Tibetan Apso, and again in 1970, this time back to the name, Lhasa Apso (“apso,” by the way, is the Tibetan for “bearded“). By then, the breed had been transferred from the Terrier to the to Non-Sporting Group, this happening in 1956.

2 thoughts on “The Lhasa “Terrier””