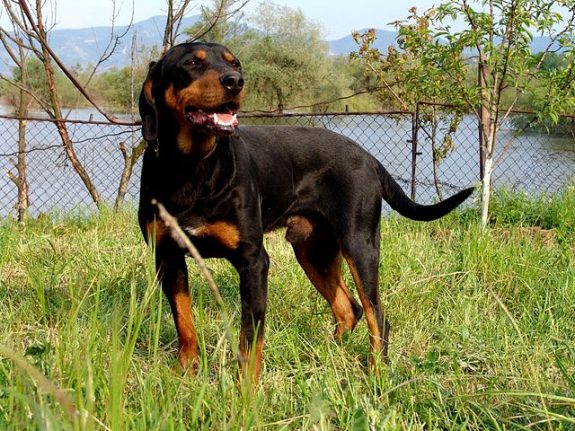 With a population of over 7 million people, Bulgaria is not a sparsely populated country, but the number of dog breeds that have originated from the Southeastern European country is small – only three breeds.  One, the Karakachan, is an LGD (Livestock Guardian Dog), while the other two are hunting dogs. In this post, we talk about the most popular hunting dog in Bulgaria, the Bulgarian Scenthound. We’ll leave the Bulgarian Hound, the younger of the two hounds, for another day.

The Bulgarian Scenthound is recognized by the Bulgarian Republican Federation of Cynology, but it’s rare outside the country. Established 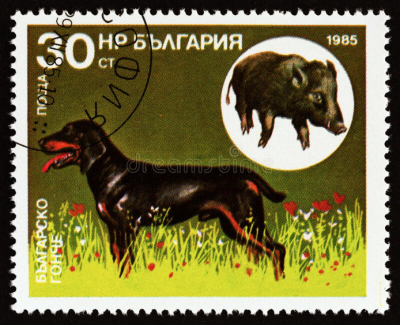 centuries ago in the Balkans, its precise origins, as is said of so many breeds, is “lost in the mists of time.” This isn’t to say there isn’t a theory.  Some scholars think that ancient Thracians kept these dogs which later bred with dogs that arrived to the area with the Turks. Artwork and paintings on pottery showing dogs hunting suggest validity to this thinking.

Although its name is perhaps too similar to the Bulgarian Hound’s name, native speakers and fanciers know the Bulgarian Scenthound as the Bulgarian Gonche, Gonche being an affectionate term meaning “tracker” or “pursuer.” This reflects both the breed’s use as a hunting dog, and the warmth engendered from its owners. Though the breed is used primarily for tracking wild hogs, the dogs had to earn their name in the early days by tracking a live hare and driving it back to their owner. Only if the dog could do this three times would he or she be regarded as a full-fledged tracker and only then would he or she earn the name, “Bulgarian Scenthound.”  The most proficient Gonche dogs were fast enough to bring the hare within striking distance up to 10 times before it escaped!

Good-natured, intelligent, resilient and highly trainable, the medium sized Gonche is a handsome dog with a short and easy-to-manage coat. The breed was presented for the first time in the World Hunting Fair of 1981 in Plovdiv.