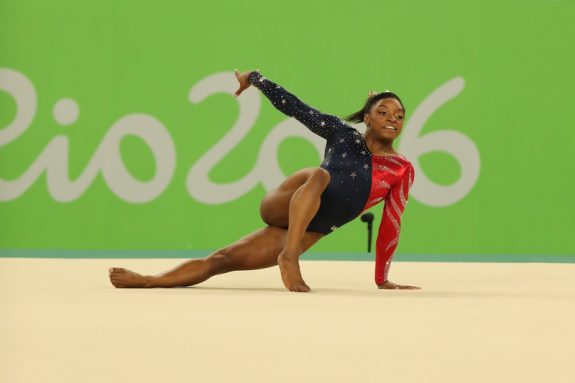 Gymnast, Simone Biles, has been astonishing people for so long that levitation wouldn’t surprise her fans. After seeing her master the deceptively, and some say insanely difficult wolf turn, it’s easy to see why she is the most decorated American gymnast, and is tied for the most decorated gymnast ever. She’s first up in the video below:

If that doesn’t impress, watch her pull off a Yurchenko double pike at the U.S. Classic, the first time a woman ever completed the skill on a vault in competition:

Still, the seven-time Olympic medalist’s decision to pull out from the team finals at the Tokyo Olympics in 2021 caught many of her fans off guard.  Citing her mental health, Biles’ action drew cheers from those who champion the importance of mental health, and jeers from those who felt she failed her team in the middle of the biggest event that they would have in years. Some who criticized her decision changed their minds after learning that Biles was among the U.S. gymnasts who testified before Congress as they described a system that failed them when they reported sexual abuse allegations against Larry Nassar, the former USA Gymnastics team doctor. Fellow gymnast, Aly Raisman said,  “I personally don’t think that people realize how much experiencing a type of abuse is not something that one just suffers in the moment.  It carries on with them, sometimes for the rest of their lives.”  Tokyo was one such moment for Biles who tied her performance at the Tokyo games to her struggle to recover mentally after being abused by Nassar. It’s a life altering event.

Showing that one’s canine buddies can help boost one’s spirits, Scott Evans of “Access Hollywood” held up cardboard cutouts of “Lilo” and “Rambo,” Simone’s French Bulldogs, as she was performing her beam routine at the Games, and he got the desired result: A whopping big grin.

Lilo and Rambo appear frequently on Simone’s Instagram page and have helped promote the Gold Over America Tour. They also have their own Instagram page with over 88,000 followers! Biles, who says she’s a proud advocate for animal welfare (note, not animal rights), adopted Lilo in 2018 with her then-boyfriend, Stacey Ervin Jr. Rambo, born on January 8, 2020, was the latest to join the family. The Frenchies are just a wee bit smaller than the German Shepherd Dogs Simone grew up with – her family currently have four of them: Maggie, Atlas, Bella, and Lily.

You can see more photos of Simone with her Frenchies here.