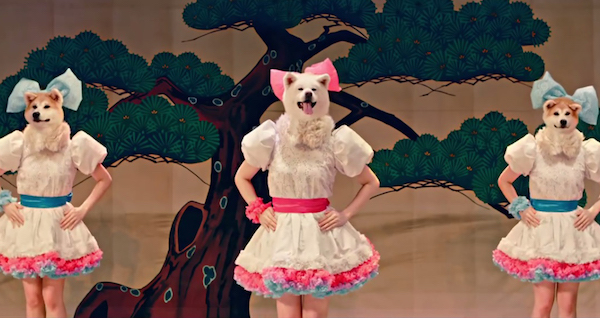 Unless you have an unusual occupation or hobby, we feel confident that the video below may be the most curious thing you’ll see all day:

The Akita-Inu Tourism Association produced the music video to promote travel to the towns of Odate, Kita Akita, Kosakamachi, and Kamikoanimura, all located in northern Akita Prefecture. As you saw, the heads of three Akita dogs were superimposed on human bodies as they sang and danced to what some thought was a catchy tune. As of 2017, the video attracted more than 1.2 million views.

The singers were the then newly formed idol group, Mofu Mofu Dogs singing their debut number, “Waiting4U～We’ll Make You Mofu Mofu”  “sung” entirely in barking with English subtitles provided. “Don’t mind if you touch,” invites the perky trio in reference to “mofu mofu,” “a state of fluffy softness and warmth like the hair on an Akita. This state is so strong that people find themselves wanting to touch the fur.”

A behind-the-scenes video was also shot:

The phrase, “lost in translation” comes to mind, because in fact, the Japanese are very proud of their native dogs, and the Akita Inu is regarded as a National Treasure. Originally known as “snow country dogs,” the Akita was used to hunt boar, elk, and the small Yezo bear (which explains the presence of hunters with guns in the video). There is even a museum in Odate devoted to the breed which at one time could only be owned by the Imperial family and ruling aristocracy.  Indeed, the care and feeding of the Akita were detailed in an elaborate ceremony, and special leashes were even used to indicate the Akita’s rank and the standing of his owner.

The opening video, then, isn’t making light of an ancient and noble breed, but rather, is building on the breed’s popularity to promote its native region.