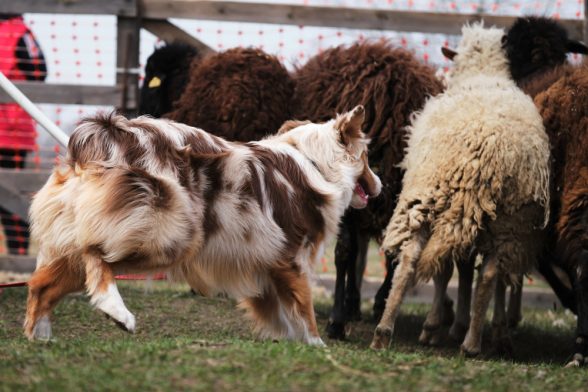 The breed was developed exclusively in the United States, but some of its ancestors came with the hardy Churras sheep imported to the New World by Spaniards needing meat to feed the clergy and soldiers. Because many parts of the American west had a climate similar to what the sheep had known on the Iberian Peninsula, flocks of the black eared woolies could be found at white-washed adobe Spanish missions in California. In truth, the ovine population grew to tremendous numbers throughout the entire Southwest, particularly in New Mexico, which until 1863, included all of Arizona.

Also factoring into the background of the New Mexico Shepherd were dogs belonging to Basques, a people native to Northeastern Spain and Southwestern France in the area of the Pyrenees Mountains. By the time of their arrival in America, demand for meat was especially high. The gold rush in 1849 brought thousands of people from all over the world to California. Sheep that had sold for dollar a head was now worth fifteen dollars a head.  Experienced hands and droving dogs were needed to work the sheep, often totaling three to seven thousand head. Many of these experienced hands were the aforementioned Basques. Their dogs, Pyrenean Shepherds, are believed by many cynologists to have formed the basis for the New Mexico Shepherd. It’s easy to see why as the breeds have many similar characteristics, including a gene mutation for a natural bobtail, and an occasional blue merle coloration.

But wait, there’s more. It’s believed that also part of the New Mexico Shepherd’s gene pool were other collie type dogs that came to America with settlers from the British Isles. These working dogs of the old collie and shepherd type were being bred on American farms, and especially on ranches in the west. In truth, there was a relative scarcity of herding dogs in the early American West,  so early ranchers likely crossed different varieties together to create dogs that did what they needed it to do.

In the end, a general-purpose ranch and farm dog emerged that had type and bred true. A versatile stockdog with a strong work ethic was its “calling card,” and in 1991, the AKC recognized it as an established breed.

Why you’ve never heard of the New Mexico Shepherd (also known at one time as the Spanish Shepherd) is because it is better known as the Australian Shepherd.  New Mexico Shepherd was just one of its many other monikers, this one because of its ubiquitous presence at those ranches and missions in “the Land of Enchantment.”