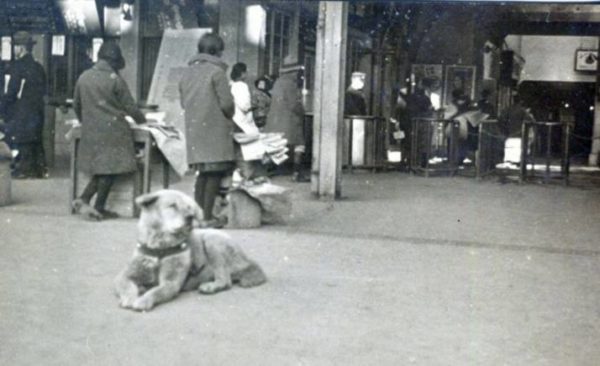 Between movies and books, the poignant story of the Akita named “Hachi” is well known. For anyone new to dogs, however, Hachi’s story began in 1923 with his birth in the northern snow country of Odate, Akita prefecture in Japan.  Hachi had been purchased by university professor, Hidesamuro Ueno, and every morning as Ueno headed off to work, Hachiko would accompany him to the train station and wait patiently until he returned home.

One day in 1925, Ueno didn’t return. He had died unexpectedly at work, but his dog, Hachiko, kept waiting. And for the next 10 years, Hachi waited. He watched trains arrive, ever hopeful for a reunion that would never come.

Hachi died in 1935, and one fervently hopes that the heavenly reunion between master and dog came, and that it was sweet. Our real reason for sharing a well known story is to share a rare 80-year old photo that was recently found showing Hachiko waiting at Shibuya Station. The photo taken by Isamu Yamamoto, a banker, and was later given to Takeshi Ando, the sculptor of the Shibuya statue that would eventually be erected to honor this faithful dog.