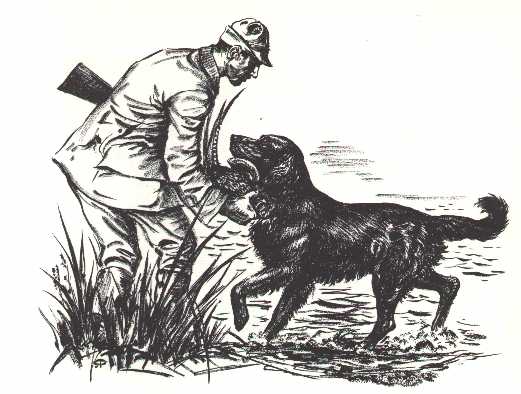 Within dog circles, the “gameskeeper dog” is widely regarded as a nickname for the Bullmastiff, but there is another breed which was once known by that moniker because it was so common on the hunting estates of landed gentry. The breed developed by British sportsmen and gamekeepers in the mid-1800s is the Flat-Coated Retriever.

Back in the day, English gamekeepers were hugely important to estate owners. They managed the surrounding countryside to ensure that there was enough game for shooting and fish for angling, and that poachers were pursued, caught, and prosecuted.

Within the world of gamekeepers, there were specialists. Stalkers specialized in the pursuit of deer, while lowland keepers supervised the maintenance of lowland habitats and reared pheasant and partridge. “Gillie,” or river keepers, looked after rivers and kept them stocked with trout and salmon, and upland keepers oversaw moorlands and grouse in upland areas. Since much of a wealthy estate owner’s time was occupied by sport, a gamekeeper ruled supreme on these estates, and they needed a dog that could find and retrieve birds that might have been missed after a driven shoot. Ironically, poachers also needed a dog to find and retrieve birds, but in their case, in the middle of the night. For both the law keeper and those who broke it,  the Flat-Coated Retriever was usually the dog of choice. They had an outstanding nose, were biddable, and when owned by a poacher, were fast and agile enough to escape the other gamekeeper dog, the Bullmastiff.

As an aside, gamekeeping is far from being a thing of the past. There are some three thousand full-time gamekeepers are employed in the UK today, and some colleges in the country offer courses in gamekeeping up to and including diploma level. Furthermore, the UK’s Kennel Club has kept the tradition alive by offering Gamekeeper Classes at their premier dog show, Crufts. The annual organization and running of the historic Gamekeepers Ring at Crufts is run by BASC, the British Association for Shooting and Conservation.

The Gamekeepers’ classes consist of two categories: The Gamekeeper Class is strictly confined to gundog owners who are employed as bona fide head, single-handed, beat or under/ apprentice keeper, river keeper, stalker, or those retired from such a position (the dog, however, may be handled by anyone else at the request of the owner). The Gamekeepers Ring is not a breed class, and while every dog is judged to the breed standard, major consideration is given to the dog’s appearance and conformation as a working gundog. These requirements make the class totally unique.

The other category is the Working Gundog Class for dogs that have regularly worked in the shooting field. Their owners must provide written confirmation from the keeper/shoot organizer that their dogs have been worked as members of a regular beating/picking up team.  You can read more about these classes here.

We can’t conclude this post without gushing (and yes, we’re gushing over this) that at the most recent Crufts (2022), a Flat Coated Retriever was declared the overall winner of the Gamekeepers’ Classes. Four year old “Ruger,” owned by Helen Fox and handled by Megan Fox, was awarded ‘Best in Gamekeeper Classes’ out of the six class winners who made it through to the main arena judging. (Fox also owned the Flat-Coated Retriever, “Rossi” who was overall winner of the BASC gamekeepers’ classes at Crufts in 2018).

Image: Artwork by renowned artist Raymond Pease is on an original page from an illustrated book on Hunting Dog’s published in 1964. The page is offered for sale here