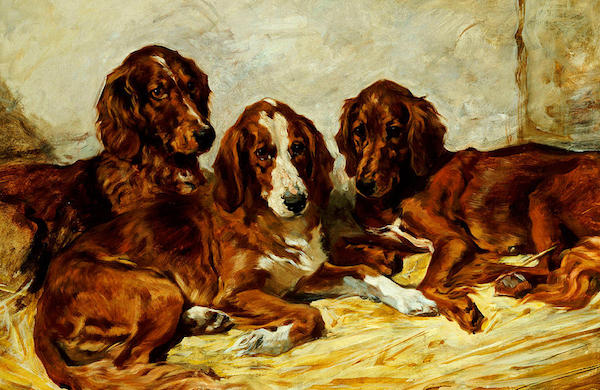 Of the setters from Ireland, the Irish Red and White Setter is actually older than the solid-red Irish setter, and for a long time, it was favored among hunters for its visibility in the field. Other hunters, however, were becoming smitten with the emerging all red Irish Setter and simply tied white cloths to their dog to spot them more easily among bramble and bush.  That said, hunters kept dogs that could work; if a sportsman had a spectacular hunter in his red setter, and his best mate had an equally fine Irish Red and White Setter, it’s reasonable to assume the dogs were bred together to create the next generation of excellent hunters.

Up until the 1860s, dogs became famous only at a local level, but the advent of dog shows around then changed that and led to a rise in popularity for the all red Irish Setter.The first exhibited Irish Setter was “Bob” exhibited by Major Hutchinson at the Birmingham, England dog show, but it was a dog who came along two year later who changed the look of the breed. “CH Palmerston” had a slender build, a longer neck, and a long, narrow head, and he sired so many puppies that nearly every Setter alive today can be traced back to him. 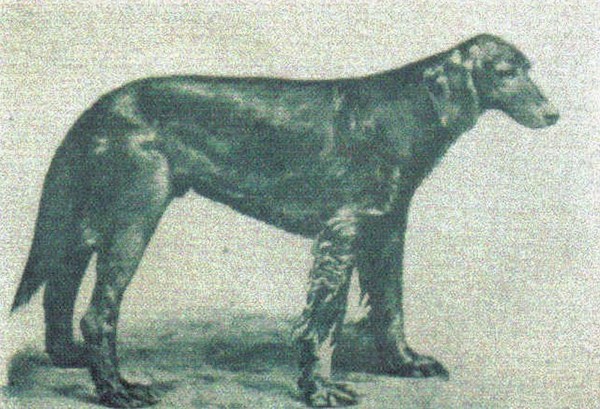 This is the only known photograph of Palmerston taken in old age.

Palmerston was regarded as the runt of his litter and was nearly drowned by his hunting enthusiast owner, Cecil Moore, who saw him as too delicate for field work. A non hunting Irish Setter enthusiast, a Mr. Hilliard, stepped in and took Palmerston for himself on the condition that he would keep him for show purposes only. The new owner took Palmerston to several local dog shows where he proved to be a huge success!

There is one other thing that the great Palmerston had: A thin white line on his head known today as the “Palmerston Snip.”