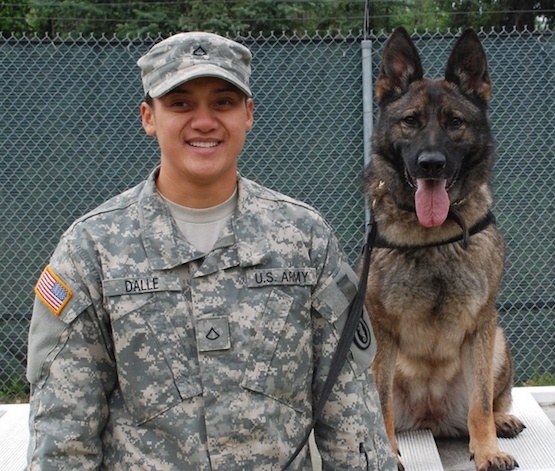 Since the inception of the United States army, dogs have had an association with that branch, but usually in the role of a mascot.

During World War I, a recommendation was made by G-5. General Headquarters, American Expeditionary Forces that dogs be used as sentries, messengers, patrol aids and for special supply missions. It proposed to procure 500 dogs from French training centers every three months to equip American Divisions. The project was disapproved by G-3, General Headquarter, and the matter was dropped.

Things got serious early in World War II when the Quartermaster Corps began to actually train dogs for the K-9 Corps. Early calls appealed to Americans to donate their pet dogs for the war effort. The profile included specific breeds, either sex, between 1-5 years old, physically fit,  and with “watchdog traits.”

More than thirty breeds were accepted into the program at the time including Airedale Terriers, Boxers, Labrador Retrievers, German Shepherd Dogs, and Saint Bernards. By 1944, the list was narrowed down to seven breeds: The German Shepherd Dog, Belgian Sheepdogs, Doberman Pinschers, Collies, Siberian Huskies, Alaskan Malamutes, and Giant Schnauzers (some list the Eskimo dog as part of the list).  Rejected breeds included Great Danes (impractical because of their size) and hunting dogs because animal scents tended to occupy their attention.

The list was further winnowed down to five breeds as trainers gained more experience and a better grasp of what was needed in a K-9. They were German Shepherds, Belgian Sheepdogs, Doberman Pinschers, Smooth Collies, and Giant Schnauzers.

Approximately 18,000 dogs reached training centers after examinations by Dogs for Defense. Almost 8,000 of those animals failed exams given at the centers. Reasons for dismissal included excitability when exposed to noise or gunfire, disease, poor sense of smell, and unsuitable temperament.

Today, the German Shepherd Dog is the only breed still trained by the U.S. Military from that original list. It is preferred because of their unique combination of traits: Intelligence, dependability, predictability, moderately aggressive, and adaptable most climatic conditions. While many dog breeds exhibit some or most of these traits, the army feels that the Shepherd, more than any other breed, most consistently exhibits all of these traits. There are modern additions, namely the Belgian Malinois and Dutch Shepherd. For specialized roles such as Odor Detection Dogs, Labrador Retrievers, and occasionally Golden Retrievers are used.