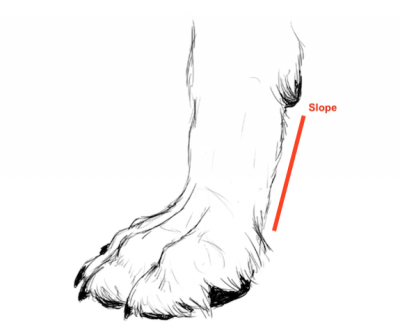 A dog’s pasterns correspond to our wrists, and as McDowell Lyon points out in The Dog in Action, a dog’s foot is made up of the same bones found in our fingers with the heel that section of the palm at finger union. Put another way, a dog walks with his fingers in front. Dogs are digitigrade animals which means that their digits — not their heels — take most of their weight when they walk. A dog’s toe bones are very important, as are the front pasterns, that space between the paw and the lower end of the radius bone closest to the paw.

The pastern’s slope, the angle seen at the right, is about 20 degrees in many breeds with well set back shoulders, BUT, pastern slope and length vary by breed. The slope and angle seen on a German Shepherd Dog is wholly incorrect in a Treeing Walker Coonhound for which “the pastern, from the joint to the top of the foot is strong and distinct, slightly slanting but standing almost perpendicular to the ground.” Consider, too, the English Foxhound in which “legs as straight as a post” were desired, with the result of straight pasterns. As an aside, the AKC breed standard adds, “The desire for straightness had a tendency to produce knuckling-over, which at one time was countenanced, but in recent years this defect has been eradicated by careful breeding and intelligent adjudication.”

Check the breed standard to determine what is appropriate. As a rule (a very general rule), some slope absorbs shock and prevents knuckling over.  It also helps lift the dog’s center of gravity. A short pastern offers more efficiency by working at a better mechanical advantage and greater endurance, but when there is too much slope for the breed, it is referred to as being “down in the pasterns.” Weak pasterns will cause the dog to lay his pasterns on the ground like a human lays his forearms on a table, but in the dog’s case, it’s not done willingly, but often because of pain. A dog that’s down in the pasterns will tire faster, and enjoy playing less (let alone working).

Books on structure correctly say that weak pasterns are usually caused from injury or genetics; in puppies, however, pasterns can also go “wonky” during teething when cartilage in the pup’s body goes soft resulting in low pasterns. This is completely natural and usually resolves itself in several weeks. Rapid bone growth, especially common in large breed dogs, can also cause pasterns to let down.  In all growing puppies, walking on slippery surfaces makes things worse by making the dog strain its muscles and joints, so a surface with good friction is helpful for them.

Some people believe that supplying a dog with vitamin C can boost help with joints and connective tissues, but as with any supplement, a veterinarian should be consulted first. Others believe that when muscles don’t function well, they become “demoted “by the brain, and using something like PawPods to helps strengthen the musculature by biasing the carpus into proper alignment. In essence, it’s similar to the way an arch support works in a human shoe.

The internet is filled with sources about how to improve weak or broken down pasterns, but to help with it, one must recognize it. Conversely, over-angulated pasterns are also problematic, and we’ll address that in another post.