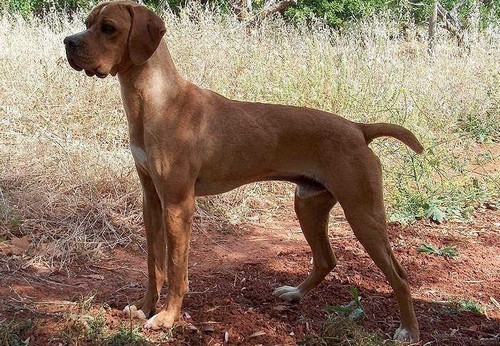 Several breeds have been named after their creator, and names like Dobermann, Boykin, Gordon, Jack Russell, and Plott, among others, are well known to us. Others, like the Billy and the Clumber Spaniel, were named after an estate or kennel of estate. A couple were named after a foundation dog, and one of them is the Chinook.

The other is the Hertha Pointer, a little known breed that remains unrecognized by kennel clubs outside of Denmark.

Right off the bat, however, we start with a difference of opinion. Back in 1864 (an agreed upon date, so far so good), the Danish Duke, Frederic Christian, crossed his Pointer named “Sport” with “Hertha,” a gun dog he brought back to Denmark from Germany. She was described as orange colored with small white markings, but had little in common with English pointers. A different source says that it was Danish soldiers who found Hertha as a stray after the end of the war between Denmark and Germany, and brought her back to Denmark and to the Duke.

Whichever version one believes, resulting puppies were the foundation stock for the Hertha Pointer. For many years, it was Danish hunters who cultivated and fostered the “Hertha dog” or “Hertha hound,” and a breed club was formed 54 years before the Danish Kennel Club was organized. By then, the Hertha had became common throughout Denmark, and in 1897, the club did officially recognize the breed and put into effect the breed standard. Indeed, photos and description were included in the 1902 edition of Henri de Bylandt’s book, Les Races de Chien.

Sadly, the Hertha Pointer began to die out and was actually considered to be extinct at one point, but three cheers for the Danish Kennel Club! In the early 70s, it showed serious conservation interest in the breed, and specifically, by the DKK’s Committee for the Preservation of National Breeds led by Jytte Weiss. Weiss had a keen interest in ensuring the preservation of native Danish dog breeds, and it was this same committee that resulted in the rest of the world becoming aware of the Danish Swedish Farm Dog, the Danish Spitz, and the Broholmer.

Once again, however, we run into conflicting reports, and this time about the current state of the breed. One source writes that breed enthusiasts continue to try for official acceptance beyond the country’s borders, if for no other reason that the breed is quite popular in Denmark, and especially so among hunters who love the strong athletic gun dog for its quick learning, steller field performance, and loveable disposition. An article that appeared in a newsletter from the Center for Bio-Diversity No. 3 summer 2002, however, suggests that efforts to boost the breed are failing, and that in a few years, the Hertha will be just a memory.  We surely hope the last source is wrong. Perhaps a reader from Denmark might have better information on the state of the Hertha Pointer today?