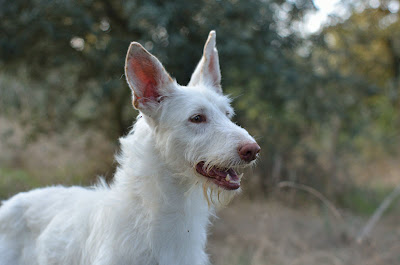 In our series on the hare-hunting hounds of Spain (also known as “warren hounds”), we’ve touched upon a few of the pondencos that developed in different parts of Spain –  specialists, if you will –  for that area’s environment.  Most have not been recognized by a major registry like the FCI, but a few, i.e., the Podenco Andaluz, have been recognized by the Royal Spanish Dog Society.

Another of the podencos is the Podenco Campanero. It isn’t recognized by the FCI, either, and some maintain that the Campanero is simply a large, shaggy white variant of the Podenco Andaluz. Others, however, point out that the Campenero is wider and taller than the Andaluz, and studies have lead Spanish researchers to conclude that the Campanero is, indeed, its own breed.  Its history would support this: To take on larger game, it’s believed that in the past, a podenco was crossed with a mastiff to create the Campanero, heavier in bone with a more robust constituion than other podencos. As a dog that is intimidated by very little, this podenco is mainly used to hunting deer and wild boar, but it has the versatility and speed to pursue hares.

Like the other podencos, the Campanero has a superb sense of smell, is resistant to fatigue, and is a lively, loyal dog, but sadly, the Campanero is regarded as “the pearl among the Podencos” because of its incomparable way of hunting. We use the word, “sadly” because podencos suffer horrible abuses at the hands of ignorant, superstitious hunters. More on that another time when we have a call-to-action prepared.

Image found without copyright on criaderoelcerval.blogspot.com and we are happy to give more attribution upon receipt on information