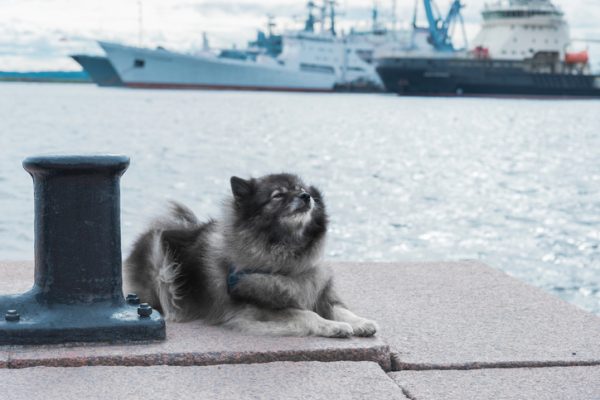 In Flemish, the word, “boat” appears as “schip,” and because a certain breed was often used as a ratter on canal barges, it was given the name, Schipperke.”  In fact, when a simple Internet search on “barge dog” is done, most results will show a Schipperke and identify it as the traditional barge dog of the Low Countries.

It is not, however, the only breed known as a “barge dog.”

In 1923, two dogs (not Schipperkes) were shown as the Birmingham National Dog and identified in the catalog as Dutch Barge Dogs, no doubt because so many of these dogs lived and worked on Dutch barges.  Indeed, when a breed club was formed in the UK two years later in 1925,  it was called the Dutch Barge Dog Club.

The club was formed by Mrs. Wingfield-Digby (née Gwendolen Hamilton-Fletcher) whose two dogs were the very pair entered at the Birmingham National Dog. Indeed, Mrs. Wingfield-Digby was the founder of the breed in England. She first saw the breed while yachting in Holland with her parents in 1905 and was captivated by the dogs running up and down the length of the barges while yapping at the great yacht approaching.  Gwendolen became so enchanted with the dogs that she bought two puppies from a gold-earringed skipper. She named them “Barkles” and “Zaandam,”  and they were soon followed by Schie, “Edam,” “Dirk” and “Comelius.”

In 1926, the breed was renamed, as was the club which became The Keeshond Club; by 1928, CCs (challenge certificates necessary to earn a championship in the UK) were allotted for Keeshonds. There is, of course, a good deal more history to this breed than what has been mentioned so far. The Prince of Wales, later King George IV, had a Keeshond in the 19th century, and of course, Dutch Patriot Party leader,  Cornelis de Gijselaar, or Kees for short, was a famous owner for whom the breed may have been renamed.

As for our silly post title, it is a reference to a common mispronunciation (read: butchering) of the Keeshond’s name. It is, in fact, correctly pronounced “caze-hawnd,” and the plural is Keeshonden.

To learn more about the breed, check out this remarkable site for additional history and photos.