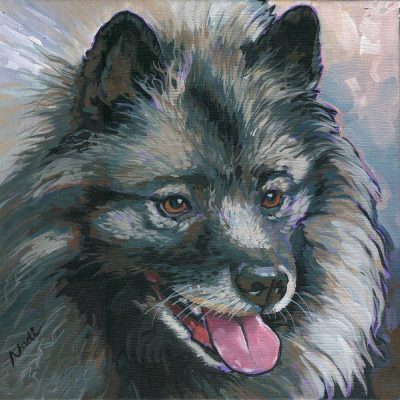 Certainly, owners of the breed know that the Keeshond was named after Cornelis De Gyselaer, an 18th Century Dutch patriot of the rebel (or patriotten) party in Holland. The dog that followed him everywhere became a symbol of the political party that rebelled against the House of Orange in the latter half of the 18th century, and while some may know that the breed was named after De Gyselaer, they may not know why since neither Cornelis nor De Gyselaer sounds remotely like “keeshond.”

In Dutch, some common shortened versions of the name, Cornelis, are Cees, Cor, Corné, Corneel, Crelis, Neel and Nelis. Another nickname for Cornelis is Kees (aha!) which was what De Gyselaer’s friends called him. His constant canine companion was also nicknamed, “Kees,” and those who adhered to De Gyselaer’s politics came to be called “keezen” by their political opponents.  In what sounds like a clash of purebred mascots, De Gyselaer’s patriots wore Keeshond pins to signal their allegiance, while the “Orangists” used an “orange” (or tawny) Pug as their symbol.

In time, “Kees” was added to the Dutch word for dog, “hond.” Thus (and quite literally), Keeshond is the dog of Cornelis.

As an interesting aside, Cornelis (Kees) and Johannes (Jan) were once the most common given names in the Low Countries. “Jan-Kees” is believed to be the origin of the word, “Yankee” for the Dutch who settled in New Netherland, the area on the east coast of the United States that extends from the Delmarva Peninsula to southwestern Cape Cod.