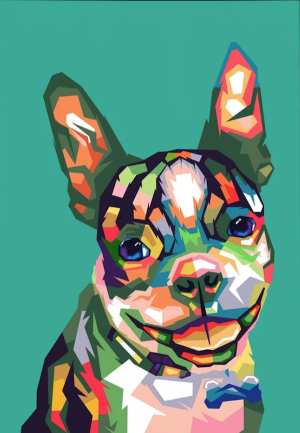 It isn’t, but buyer beware. It’s important to know more about “red” in this breed.

The AKC breed standard indicates that the only acceptable colors are brindle, seal, or black with white markings. It further adds (and we paraphrase) that in the sun or bright light, a “seal” Boston Terrier (which looks black in most lighting) actually has a red cast to it.  Any color not described in the standard is a disqualification in a show ring.

Some breeders will say that “red” is the most well-known color of the non-traditional colors in Boston Terriers. This is a bit of double speak because their version of red does not meet the breed standard. There are a lot of variations in red Bostons: Some are very light and some are dark orange-red, but all of them typically have a red nose and either gold or hazel eyes, and that should be a warning to prospective buyers that these are dogs that do not meet the standard: Bostons should have dark eyes, and black and wide noses. Red Bostons, then, are self colored, and this is at odds with achieving correct expression, difficult to get in a dog with light eyes and a pale nose. 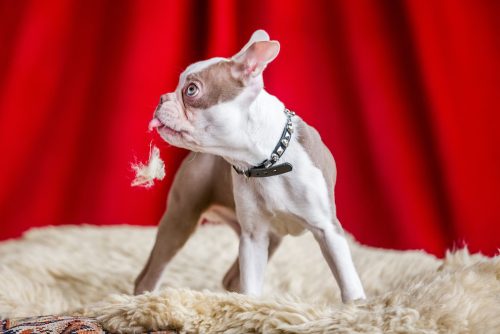 Substandard breeders will claim that the red color is ‘rare,’ and to that end, charge hefty sums for a puppy they might call a “Red and White Boston Terrier, “Liver and White” Boston Terrier, or simply a Red Boston Terrier to make it seem unique. It is not. To our knowledge, red in the Boston Terrier has been around a long time and was even mentioned in a book published in 1910 by Edward Axtell, The Boston Terrier and All About It (described there as the Jack Reed dog).

Red is produced when the gene (e) stops the production of black pigment until what’s left is the production of the red pigment. A Boston with two copies of the gene (e) will pass it on to all of its offspring. We found nothing to suggest that there are any behavioral or health issues related to the color, it’s simply something that may be linked to the Bulldog in its ancestry, though others suggest that somewhere along the line, the Boston was bred with another breed to get the red color. That said, some of the characteristics associated with the color have been disqualified from the standard for over one hundred years, and there seems little reason to breed the color benefits the breed.

To reiterate, there is a wide range of colors in this breed, not all of them acceptable, and not all of them should be bred. From the Boston Terrier Club of America website: Some breeders are breeding Bostons by following a different standard, or not following one at all. While these dogs are without a doubt loving companions, it is important to recognize the motivation behind such breeding practices and to know that they aren’t condoned by the BTCA.

It seems fitting to conclude with a quote out of Edward Axtel’s book:

To those who ‘must be doing something’ and who find a certain sense of satisfaction in tinkering with the standard, we extend our pity, and state that experience is a hard school but some people will learn in no other.

To those of us who love the dog as he is and who believe in ‘letting well enough alone’, we must admit we might as well suggest to improve the magestic proportions of the old world cathedrals and castles we all love so much to see, or advocate the lightening up of the shadows on the canvas of the old masters, or recommend the touching up of immortal carvings of the Italian sculptures.

We advise the pracher to stick to his text, and the shoemaker to his last, and to all those who would improve the standard we say: Hands Off!”