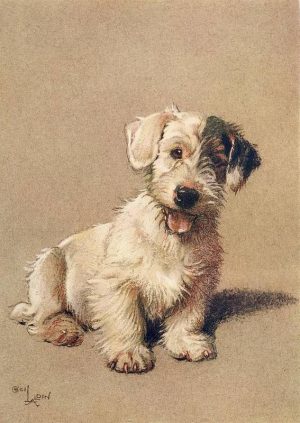 It conjures a marvelous mental picture: Two dogs placed on tables to be studied by people who will help define the qualities that make them noteworthy. Such was the scene at the first meeting of The Sealyham Terrier Club in the UK: A pair of Sealyhams were set on tables to serve as models and help fanciers form the breed’s Standard of Points. 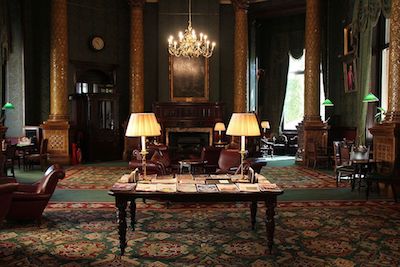 That there even was a first meeting of a Sealyham Terrier Club was due to a foursome of terrier enthusiasts who met in the smoking room of Sealyham Mansion in 1908; Mr. and Mrs. Victor Higgon were there, along with Captain Jack H.Howell (the Master of Foxhounds), and his brother, Adrian Howell.

There was no small amount of experience in their gathering.

Mrs. Higgon had sponsored a class for Sealyhams at Haverfordwest in 1903, the Sealyham’s first recorded show appearance, and many experts opine that outside of Edwardes, Mrs. Higgon had the most impact on the breed. Along with the breeding records of Capt. Howell, her records helped document the early history of the breed.

Over crystal ashtrays, amber colored drinks, and deep red leather seating in a room that may have resembled the one at the right (in our mind’s eye, anyway), they bandied about the idea of forming a club, in part to persuade the Kennel Club to register the Sealyham as a distinct breed. To get the word out, they inserted notices in local newspapers to alert others who might be interested in the idea to join them.

The male of the two was “Peer Gynt” bred by Mr. G. H. Morton, a dog that many considered to be the closest in type to what Captain Edwardes, the breed’s creator, had in mind. It didn’t hurt that, as A. Croxton Smith put it in his book, The Power Of The Dog, Peer Gynt had “a reputation for subterranean exploits,” as well. The dog was rarely been beaten in the show ring, and again, quoting Smith, “his purchase by Mr. Harry Jones for £50 at the Kennel Club show of 1910 marked an epoch in the history of the variety.” We know less about the bitch, “Nellie the Mariners.”

By 1910, the new club had nearly 60 members,  but getting separate registration for the breed was slow going.  In a terrific article by Henry Sutliff, III, he writes that Jack Howell, now the club’s Secretary-Treasurer, became so incensed at the lack of progress by the Kennel Club that he went to the Club “wearing a morning coat, striped trousers and top hat—with a white carnation in his buttoneer,” and using “his considerable charm to the effect that they agreed to present Sealyham classes at their Crystal Palace show.”

Ch. St. Bride’s Demon became the first Sealyham Terrier to qualify as a champion and by the end of 1937, there were one hundred and eighty-seven champions: ninety-two dogs, and ninety-five bitches. It’s fair to say that the fact that these terriers were able to get their titles at all started in a smoking room.