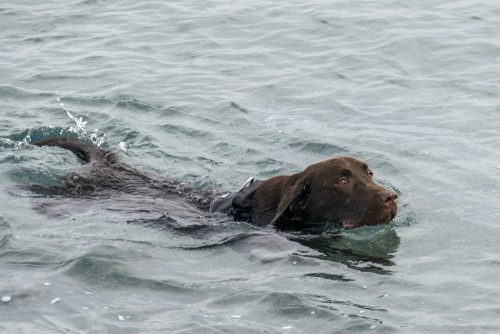 Simply put, pass-shooting is firing a gun at birds as they fly by, and while some people today may have the sense that it feels unsporting, others may say that it’s no less sporting than flushing them out of a bush or tricking them with decoys. That discussion is for another time in another place. Our point in bringing it up is that historically, pass shooting was the shooting sport for the well heeled and aristocracy in Great Britain, and it is out of this activity that retriever field trials in the United States grew.

Across the pond from the UK, shooting at birds was done to put food on the table. The person holding the gun wouldn’t be wearing tweed knickers or a single-breasted tweed jacket with box pleats on the back and front (known as a Norfolk jacket, and favored by sportsmen because it didn’t not bind when the elbow was raised to fire). Rather, hunters in the field were indistinguishable from each other because of what they wore. The dress was the same whether the wearer was a banker or a barn builder. This changed during the Jazz Era when fortunes were made, and a rich American sportsman chose to imitate the lifestyles of British peerage. Suddenly, all things English and Scottish were de rigueur: Pass shooting, the clothes, the guns – even gamekeepers, their dogs, and kennel men to train them were imported. American estates became the place to be on weekends when shoots doubled as fashionable affairs that all the “best people” attended. Think The Great Gatsby, a book written by F. Scott Fitzgerald who actually coined the phrase, “The Jazz Age,” and you get the idea.

Yet again, change was around the corner and it was the Great Depression. Many fortunes were lost, but not all of them, and wealthy families continued their sport. By now, gamekeepers who’d made the trip to America called it home, and the sport morphed into retriever field trials because it was what gamekeepers knew. Still, it remained a closed sport. Legendary trainer, the late Richard A. Wolters, wrote the revolutionary book, “Water Dog,” the average hunter’s “bible” in which the reader is taught how to turn their dog into a skilled retriever. He once described the first trial that occurred at Robert Goelet’s New York Glenmore Court estate in 1931. It was held on a Monday expressly to avoid spectators, and while the event was supposed to be held under AKC and Labrador Retriever Club rules (which ran the trial), those present reported that it was really run under British rules. Pass shooting was simulated, tests were simple retrieves, and, to be blunt, the whole thing generated a yawn from hunters and the general public. Using a dog as an upland retriever was foreign to how Americans hunted, and had the sport continued into the future as it played out in 1931, the preservation of retrieving breeds would have been short lived.

Instead, an “interloper” made waves – literally – the next year and in Wolter’s view, quite literally save the day and saved retrievers.

The Chesapeake Bay, with its 200-mile-long estuary surrounded by Maryland and Virginia, set the breed standard for the Chesapeake Bay Retriever who knew a thing or two about working in water. In 1932, the American Chesapeake Club held the first licensed retriever trial, and in layman’s terms, Chessies “schooled” the Labrador Retrievers. Perhaps we’re overstating things by saying that the Brit gamekeepers were rattled by the results, but the fact is that they turned tail, went home with their Labs, and retrained them for water retrieving. Wolter writes, “By the next year, they were back and beat the Chessie at his own game.” The popularity of Labs soared.

A few years later, the Golden Retriever Club held its first trial, and the dogs impressed everyone as companions and gun dogs.

Retrievers had arrived, and field trials had to change. British rules could no longer accommodate the number of dogs entered in American field trials. Tests got larger, each dog got the same test, and the sport of field trialing has exploded since its early days.