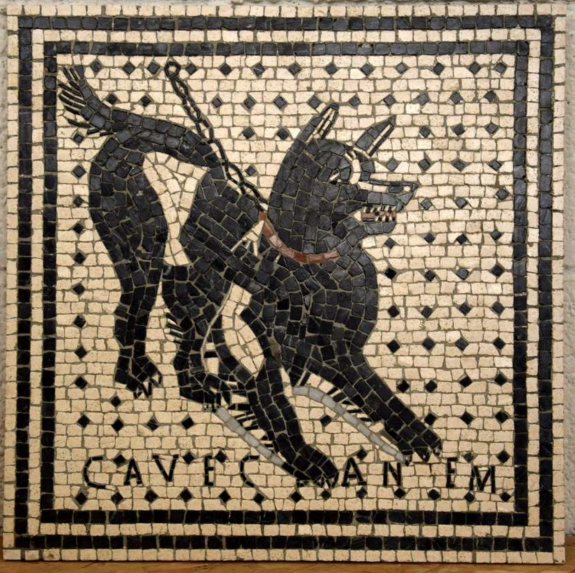 Every student of Latin (show of hands) knows this old saw about the Latin language:

“Latin is a dead language, as dead as it can be.
First it killed the Romans, and now it’s killing me.”

Another thing that teachers of Latin 101 show their students is the image you see here. The tile mosaic shows one of the world’s most famous dogs found on the floor of an ancient Pompeii archaeological site. For almost 2,000 years, the snarling dog discouraged intruders from setting foot in the Domus of the Tragic Poet, a house dating to the 2nd century BCE. As fair warning, the owner thoughtfully included the words, “Cave Canem,” or Beware of Dog.

The house discovered in 1824 by the archaeologist, Antonio Bonucci, has interested scholars and writers for generations, and that includes cynologists. There are among them who believe that despite the dog’s bared teeth and sharp nails, the warning wasn’t to scare off intruders of a massive, short tempered beast of a dog, but rather, to alert invited visitors to tread carefully so as to not step on the tiny Italian Greyhound living there. This is mentioned in Bonnie Wilcox and Chris Walkowicz’s fabulous “The Atlas of Dog Breeds of the World.”

As an aside, the mosaic was preserved under the ash of Mt. Vesuvius in 79 AD, but after years of grime, it was restored and returned to the public eye in 2015; it is now protected beneath a transparent cover designed to allow full public viewing.

Although the idea that the Iggie was raised as a pet in ancient Rome and Pompeii is difficult to document, certainly it was a distinct breed and court favorite in southern Europe by the Middle Ages. That said, records of Italian Greyhounds were found in ancient Egypt and it’s believed Phoenicians moved ancestors of the breed from Egypt to Rome in the fifth century BC. If its antiquity is still doubted, one need only refer to the Greek historian and philosopher of the Roman period, Arrian, who described a breed known as the Vertragus, named for its swiftness – and believed to be the ancestor of the modern Italian Greyhound. Grattius also refers to the Vertragus: “Swifter than thought or a winged bird it runs, pressing hard on the beasts it has found.”

It’s not out of the realm of possibility that the owner of the tile mosaic thought to warn visitors of a small dog in the house, but also to fool would-be bad guys that a vicious creature guarded the house. Nor is it a stretch to consider that the small dog could have been the ancestor of the IG. After all, genetic analysis has revealed that lapdogs were among the earliest types of dog to live with citizens of the Roman Empire.  They lived in ancient Roman as pets, and in Paris Hilton style, as fashion accessories and status symbols for the wealthy and stylish, though we suspect Paris didn’t keep her Chihuahua to attract fleas away from her.

But you never know.