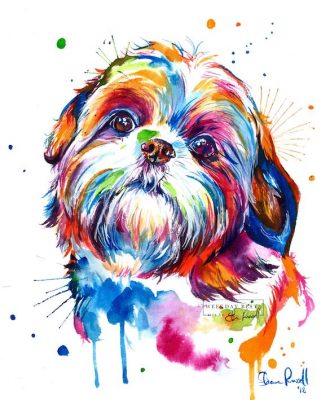 As colors go, the Shih Tzu’s AKC standard is generous: All colors and markings are permissible, and they are to be considered equally.

The Empress left nothing to chance. She kept complete pedigrees and descriptions of physical markings for all her breeding Shih Tzu, and without question, she understood color inheritance and the importance of black, and the darker shades of brindle and silver to maintain pigmentation. For religious reasons, she held Shih Tzu of parti-colors (Hua Tse) with perfect facial markings and perfect saddles in high regard, and solid colored Shih Tzu even more so. Later breeders assumed that Cixi was partial to gold dogs (called Chin Chia Huang Pao), and gold & white Shih Tzu called Chin Pan To Yueh (yellow dog with white mane), but her favorite Shih Tzu of all time was actually an entirely black Shih Tzu named “Hai Ling,” or Sea Otter. Its solid black color was referred to as Yi Ting Mo, or “lump of ink. In fact, the only known photograph of the Empress with a Shih Tzu is of her with Hai Ling.

As an aside, after the fires and pillaging of the Royal Palace in 1908, it’s said that eunuchs who fled before the flames broke out took most of the Shih Tzu with them and sold them to high paying foreigners and Chinese elites. This may be how the Comtesse d”Anjou later came to own some descendents of the Palace Shih Tzu, including a dog named,”Chu Po,” a solid black Shih Tzu and a great grandson of Hai Ling (Sea Otter).

Image: Colorful Shih Tzu in Watercolor by Shaunna Russell is available as a print here