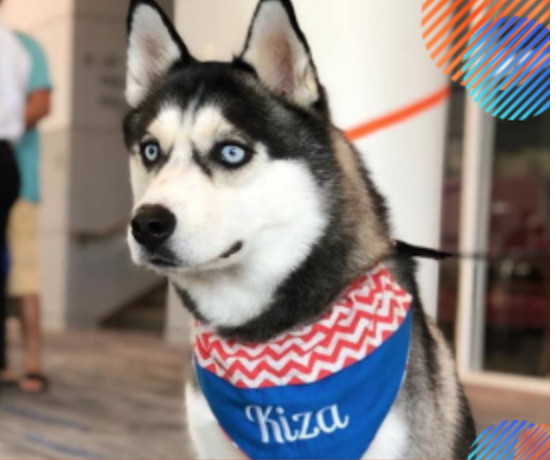 In conversations about college canine mascots, Smokey, Uga, and Reveille seem to take all the oxygen out the room, such is their fame. There are, of course, other dog mascots, including a Bullmastiff, Fox Terrier, Saint Bernard, Boston Terrier, Catahoula Leopard Dog and Saluki. We’ll add a Husky to that list.

During the first convocation of the 2017-2018 school year,  Houston Baptist University family welcomed Kiza III, their new Alaskan Husky mascot born on July 14th, 2017.  She is cared for by the HBU Sled Team which is responsible for all of Kiza’s activities on and off campus including walking, grooming, feeding, and taking her to athletic and school events.

By referendum, the students of HBU voted to adopt “Huskies” as the new mascot in 1965, but the very first mascot was “Toby,” an Alaskan Malamute who was stolen in 1968.

The second mascot wasn’t a husky, either. “Buttons,” was a 10-year old Samoyed who was with HBU briefly until a new mascot could be secured. That dog was yet another Samoyed, “Mingo” who had a full and charmed life until his passing in 1982.  Mingo was buried in the courtyard of Sharp Gym where a memorial marks his grave.

Mingo II came along and he was – you guessed it – another Samoyed. Mingo II proved to be noise-averse and was given to a loving home shortly after.  Next came “Butch,” a Samoyed that was housed near the campus police during the week, and with his trainers on the weekends. 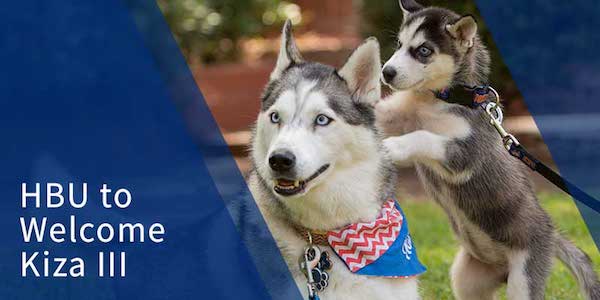 The first actual Siberian Husky came in the fall of 1995.  “Wakiza” (a name meaning “determined warrior” in the American Indian language), adapted quickly to the campus life and had celebrity status among students and staff. Wakiza died at the age of ten and is buried in the courtyard of Sharp Gym near Mingo.

Kiza II was introduced in 2010 during student orientation. She was adopted from Houston’s Husky Haven, a non-profit organization that rescues Siberians. Kiza II went into retirement during the Homecoming season of 2017, and now enjoys her retirement with her family.

Whit Goodwin, associate provost for HBU Student Life, says that Huskies are ideal University representatives: “They’re hard-workers, they’re good-natured and they’re smart. All of those things represent a piece of what HBU is about.”