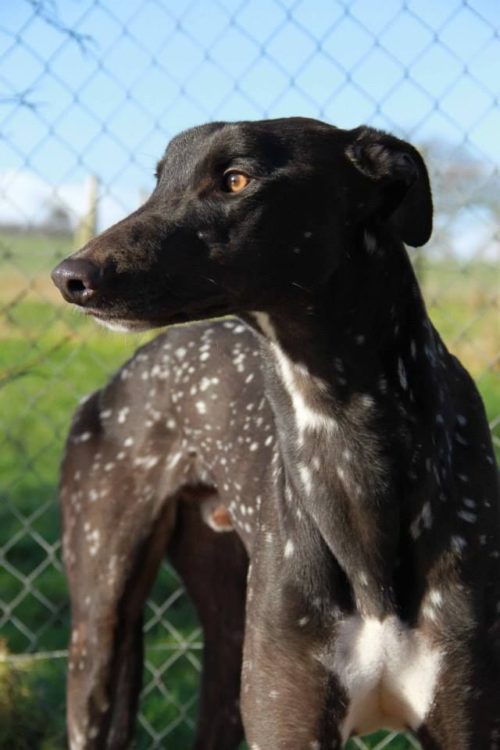 Color is “immaterial” according to the breed’s AKC standard, so one wouldn’t think there’s much to discuss about it. The Greyhound already has the shortest of all breed standards (something that has always struck us as a bit ironic given the antiquity of the breed), but as we are dog people, there is always room for discussion because our breeds are so interesting.

Color may be “immaterial,” but the breed still comes in thirty of them (or eighteen official colors, according to American Greyhound track operators, with countless variations of each one), as well as four markings. That said, all Greyhounds are one of two basic colors: Black or sable red, and these are determined by gene pairs at the A location.  If a puppy has AsAs genes, it’ll be black, and if it has Asay genes, it’ll still be black because the black As is dominant over ay sable red. If the puppy receives an ay gene from each parent, then it is ayay and will be sable red, an overlay of black guard hairs over a red coat.

The most common Greyhound color is brindle, while about 18% of Greyhounds are black, 16% are red, 6% are fawn, and only 3% are blue (or what most people call grey). It is the black Greyhound that is the focus of our post, and more specifically, the “snowflake” pattern that, according our homework, is said to be traced to one sire.

In horses, this “snowflake” marking is known as “birdcatcher” spots originally named for the early 19th century Irish-Thoroughbred stallion, “Birdcatcher.” In a black Greyhound, the white ticking creates what’s called a “snowflake” hound. These small white spots are almost like ticking in reverse, but when a photo isn’t handy to show what these dogs look like, a vivid description is that the dogs look like they’ve been lightly sprinkled with snow or white paint.

We’ve always liked the sentiment behind the saying that the best Greyhound color is the one of the hound you have at home,  but still, it has to be exciting to watch a newborn litter of Greyhound puppies grow up because their puppy colors are strikingly different from their adult colors. In fact, we’ve read that the only two Greyhound colors that don’t change between birth and adulthood are black and solid white.  We’d be interested to hear more on this from Greyhound breeders.

Just in case you’re thinking of repainting a room and are stuck for a neutral color, may we suggest a paint made by PPG paints called (wait for it) –  Greyhound? 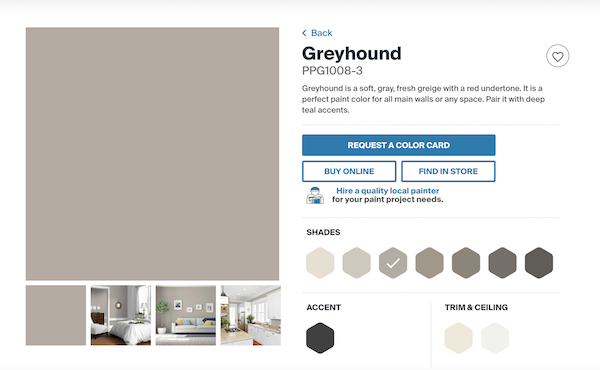 2 thoughts on “The Snowflake Greyhound”