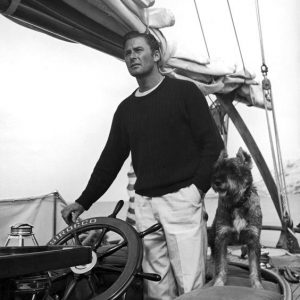 As terrific as Standard Schnauzers are, it was a 1930s and 40s cinematic heart throb who brought a good deal of attention to the breed. Actor, Errol Flynn, a reputed womanizer famous for his portrayal of swashbuckling characters, was a huge dog lover who owned several Schnauzers. His “heart dog,” however, was “Arno,” Flynn’s constant companion both on film sets and his yacht. Arno was famous for barking loudly whenever the director cried “cut” as he knew that filming was over, and he’d have Flynn all to himself.  “Arno” got almost as much press coverage as Flynn’s offscreen romances.

“Arno” usually accompanied Flynn on his yacht,”Sirocco,” where the dog would entertain himself by snapping at flying fish. On an August day in 1941, it’s believed that Arno unintentionally jumped overboard after trying to snag a flying fish when no one was around.  Despite Flynn having hired several boats to look for “Arno,” it was too late to save him; his remains washed up on shore near Balboa, California three days later, the inconsolable actor too overcome with grief to claim the dog’s body when it was discovered.  A Hollywood gossip writer made the mistake of reporting that Flynn didn’t really care about his dog, causing an enraged Flynn to get drunk and go after the reporter whom he beat unconscious.

Flynn buried “Arno’s” collar in the backyard of his Hollywood Hills home, and arranged for members of the Coast Guard to give his six year old dog a naval burial at sea.

Later, a biographer writing about Flynn would say that the actor loved “Arno” more than any human being in his life.

Image of Flynn and “Arno.”

One thought on “The Swashbuckler’s Dog”