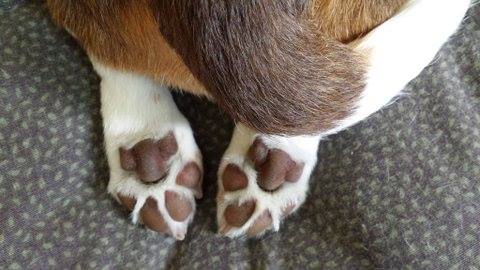 Can you identify this dog’s breed from the photograph?

Maybe not decisively, but the dog’s tail narrows down the field to where strong consideration should be given to a hound breed. Many – but not all – Beagles have a white tipped tail, a feature that was bred into the breed to make them more visible among tall grasses and dense vegetation when they have their nose to the ground to pick up a scent during a hunt.  Indeed, some purists maintain that a “proper” Beagle must have that white tip, but the AKC breed standard (of which 5% addresses the tail), doesn’t say a word about tail color, and the AKC Judges Study Guide states that the absence of a white tip is not to be penalized. As an aside, most Foxhounds and Hamiltonstövare also have a white tipped tail. 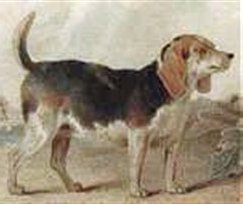 A portrayal of a Beagle in the 1800s shows that white tipped tail. Source: Public domain,

Remember the Beagle’s purpose as a scenthound! Most aspects of its breed standard are geared towards this function, and to that end, tail carriage is noteworthy. The tip of the tail (also called the “stern”) should be held slightly higher than the dog’s head when alert and held at attention. The tail should never incline forward from its root, nor be carried over or touching the dog’s back because practically speaking, this would make it hard to follow a Beagle in the field. Some exhibitors fluff up the white part of their Beagle’s tail before entering a show ring,  perhaps a nod to its hunting role because adequate brush on the tail is necessary to protect the tail from damage while in the field. More brush, however, isn’t necessarily better.

There is something called “Beagle Tail,” which in other breeds may be called “Limber Tail”or “Limp Tail.”  It’s becomes apparent because the tail hangs down after the first few inches. When it occurs, it’s typically after a Beagle has been swimming or gotten wet, and the dog shakes off water and concusses the tail. The tail needn’t have actually hit something, it’s a form of whiplash. It’s painful, and can take hours or days to heal.  The best way to avoid Beagle Tail is to drape a towel over the wet dog and not let him or her shake too vigorously after getting wet.  In the event it happens, however, the only real remedy is time and anti-inflammatories.