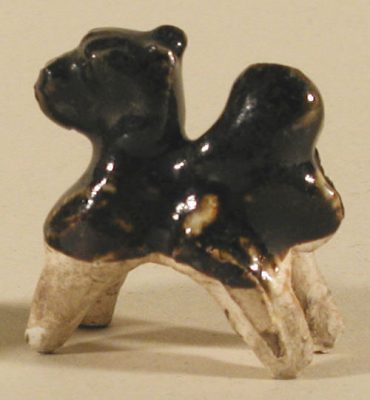 We came across a statement that got us curious: “Both Chow Chow and Shar-Pei belongs to the family of Tang dogs in Southern China.”

The “Tang dynasty” is regarded by many Chinese as the Golden Age of China’s history. It ruled China for a little less than three centuries, but it was a time of cultural and military progress. The first comprehensive criminal code in China was created in the Tang Dynasty. Literature flourished, Chinese poetry reached its pinnacle, and the world’s earliest dated printed book was made. Trade was robust, and Chinese ships were already doing business with all major Asian maritime countries; some even managed to get as far as Australia, Africa, and America.

Spitz-like dogs were on those ships, guarding goods and offering companionship. People started to note that the dogs they had at home in China and on their sailing vessels were unique – and uniquely Chinese. The word, “tang” (often used as a prefix to refer to things that are Chinese) lent its name to these dogs, as well. Their name was not only a nod to the period of time in which they lived, but also referred to an ancient spitz-like group of dogs that spread throughout the world by ship and human migration.

Over time, “Tang dog” became a general name for local dogs. In the Cantonese dialect, a common expression used for these local dogs is “Tong Gau,” “Tong” meaning “Tang,” and “gau” meaning dog, and it was a reference not to purebred dogs, but of mixed-breed dogs. That said, there is a narrower use of the word, and it specifically refers to spitz-like dogs with long or short coat,  pricked ears, a bushy tail accompanied by a longer coat, or a whip tail goes with short coat – all mentioned in a guide issued by the Chinese Kennel Union regarding a Tang dog’s appearance.  Two breeds emerged as descendents of these early Tang dogs, the Chow Chow and the Chinese Shar-Pei.

Perhaps because one Tang Emperor owned over 5,000 Chow Chows, the Chow Chow has been called the Tang Quan, or “Dog of the Tang Empire.” One anecdote even says that some emperors of the Tang dynasty had hunting kennels of 25,000 couples of ‘hounds’ of true Chow type.

As for the Shar-Pei,  in a paper presented by Eric T. Omura to the Midland Shar-Pei Club, he notes that in the Shar-Pei community, the term “Tang dog” and “Shar-Pei” were often used interchangeably even though the Shar-Pei has a narrower interpretation on some of the features of a Tang dog. Both breeds are regarded as having been members of the Tang group of dogs.

Image: Earthenware dog with brown glaze from the Tang dynasty (618–907); Gift of Sadajiro Yama and on view at The Met Fifth Avenue in Gallery 207, photo public domain.