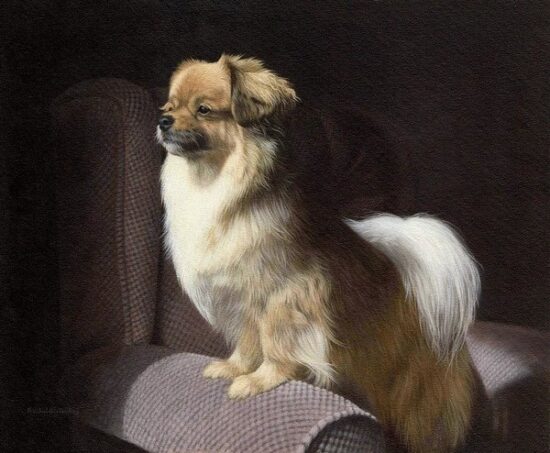 An ancient breed, the Tibetan Spaniel didn’t make its way to Great Britain until the 1890s, but sources can’t seem to agree on the name of the dog, let alone who introduced the breed there.

Some say that Mrs. McLaren Morrison brought the first “Tibbie” to England, a dog named, “Yezo” who was exhibited at Crufts in 1898.  Furthermore, the source adds, Yezo and a female named “Sikkim” produced the first officially recorded litter of Tibetan Spaniels in England.

Another source writes that the earliest Tibbie in England was the pet dog, “Ching” of the daughters of Mr. Russell-Allan of Dalhabboch who purchased the dog from a sailor returning from the Far East in 1895;  Ching, described as small, aloof, dignified, and bright red in color, lived until 1908.

Regardless of who brought the breed to England, it had a very slow start for such an enchanting breed.  The Tibbie did not have good numbers when World War I erupted, and while the war destroyed the breeding programs of most all breeds, the Tibetan Spaniel was almost entirely lost in England.

In the 1920s, a sound breeding program finally began to be implemented.  Dr. Nancy Greig, working as a physician in India, sent Tibetan Spaniels to her mother living in England, and the few that were exhibited at Crufts between 1929 and 1939 were the dogs sent by Dr. Greig.

In 1934, a Tibetan breeds association was formed (the Greigs owned other Tibetan breeds, as well) which in part, sought to accurately distinguish between the Tibetan breeds. It adopted the standards on such breeds as the Tibetan Spaniel, Lhasa Apso, Tibetan Terrier and Tibetan Mastiff, and recognized the Shi-Tzu as a separate breed, as well.

No sooner was WWI a distant memory when WWII erupted. All Dog Shows and exhibitions were stopped. Food became scarce, and distemper hit many kennels hard. Dr. Greig bred rabbits to provide meat, and by selling the pelts, she had a meager income. Nevertheless, only one pre-war Tibetan Spaniel survived, a red Tibbie named “Skyid” belonging to Mrs. O. Seybin. It’s said that many, if not most of the pedigrees of present day Tibetan Spaniels can find Skyid in their family tree.

Reviving the breed after the war years is credited to Lady Wakefield who had been living in the Punjab of Northwestern India with her husband, Sir Edward Wakefield. The couple had been given a bitch named “Mughiwuli” in 1938 who was bred two or three times to stud dog named “Tashi” borrowed from the Tashi Gong Monastery. Mughiwuli and Tashi’s puppies became the new crop of Tibetan Spaniels in Europe after the Wakefields returned to England in 1946 with a Mughiwuli’s son, “Lama,” and a Tibbie named “Dolma” that Sir Edward had acquired from the Phari Dzong Monastery in the Chumbi Valley of Eastern Tibet with the help of the Maharaja of Sikkim. Because the Maharaja endowed several monasteries, he was one of the few people who could get a Tibbie bitch as the monks were always very reluctant to part with their dogs, especially females.

Friends of the Wakefields,  Colonel and Mrs. Hawkins, also returned to England with their Tibbies, “Garpon” and “Potola” (Lama’s littermates), and these four Tibetan Spaniels were the heart of the breed’s modern-day foundation in that country.

In 1947, the breed began to recover in England after some successful breedings and additional importations; in 1958, The Tibetan Spaniel Association was formed, and in 1959,  Kennel Club registrations for the breed numbered 58 dogs! The Kennel Club recognized the breed in 1960 and gave the breed championship status for the first time allowing four sets of CCs that same year.

Image: Tibetan Spaniel in oil by Rachel Stribbling is also available as a print, and in lifestyle and home decor items here.