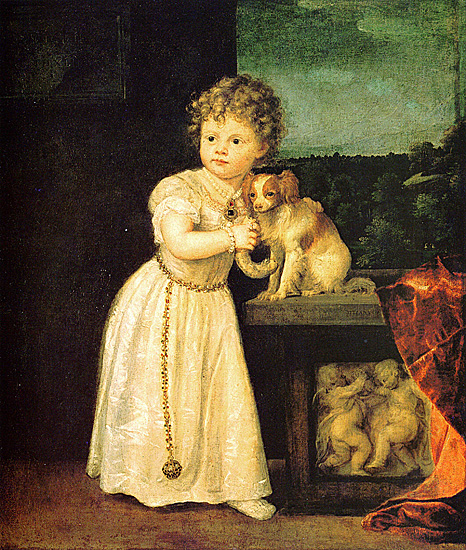 Something interesting happened on the way to Renaissance art in the 17th century: Dogs became more common as subjects. In fact, they were becoming the principal subject-matter, and if you doubt this, consider the painting below: 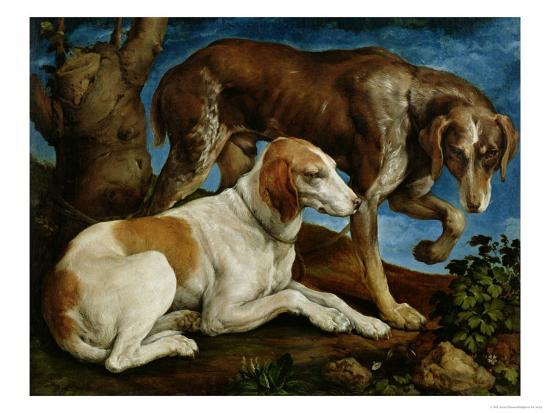 Two Hunting Dogs Tied to a Tree Stump were painted by Jacopo Bassano. Today, the pair of Italian Pointers are known by another name, but the breed isn’t all that different today than it was in 1548 when the painting was rendered. Can you guess their breed?

They were Bracchi Italiano, and in the Renaissance, they (and other purebred dogs) were symbols of loyalty, and also of high social status. The breed wasn’t, however, the only breed known during this period of rebirth, renewal, and reawakening.

Titian, a tremendous Venetian painter famous for his skillful use of color, had one breed most associated with him: The Papillon. It was known at the time as the Titian spaniel, probably because at least four major paintings by Titian had the breed as part of their composition. The Papillon Club of America has a few of those painting posted here.  These little spaniels ennobled their European masters by representing their power, wealth, and cultivation.

Papillons appeared increasingly in Titian’s paintings from the 1530s, around the same time he moved into a large house with a lovely garden in which he would live the rest of his life. Referred to as casa da statio in the parish of San Canciano, the name hinted at an upper-class home – and why not?  Like his countrymen, Titian aspired to a high social standing, and a sizable house would have expressed his social standing. Part of that largesse would have included many family members and servants who lived there – and yes, several dogs would be part of it.

As for Titian’s patrons, the smaller the size of their spaniel,  the more valued it was. One early English source described the spaniels thusly: “These puppies the smaller they be, the more pleasure they provoke, as more meete play—fellows for minsing mistresses to bear in their bosoms, to keep company with all in their chambers, to succour with sleep in bed.” (Topsell 172; also qtd. in Thomas 107-108).