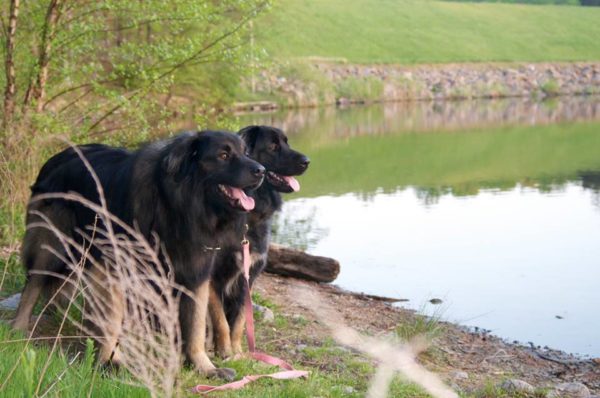 Over the years, farmers and ranchers have used many methods to reduce predation from coyotes, bears, wolves, mountain lions, jaguars, and packs of domestic dogs –  and not all of them have been “green” (chemical poisons), mindful of territorial wild life (fencing), or the effects on non-predatory wildlife. A more aggressive method – shotgun or rife – rarely ends well for the predator which is sometimes an endangered species like the jaguar.

For centuries, another “tool” was the use of Livestock Guardian Dogs (LGDs), but as large predators became eradicated throughout much of the world, use of LGDs also declined. Happily, this is changing; the dogs are making a comeback, and with hugely successful results. In South Africa alone, LGDs have virtually eliminated livestock depredation on 90% of farms participating in the Cheetah Conservation Fund’s Anatolian Shepherd program. In Texas, Texas A&M AgriLife’s Research Ranch weaned only a 20 percent lamb crop in 2009, but when LGDs were acquired to reduce predation in 2012, the lamb crop exceeded 100 percent every year since.

That said, it can be daunting for the owner of a ranch, small farm, hobby farm, or homestead to know which breed would be best for their circumstances given how many LGD breeds there are in the world.

Anyone considering an LGD should know that like ranchers, Livestock Guardian Dogs also have different “methods” to protect their herd from predators, and the three main protective behaviors are territorial exclusion, disruption, and confrontation.

Territorial exclusion is especially important for protection against canine predators. All dogs, wild or domestic, use scent to mark the boundaries of their territory. Other canids, even of different species, recognize these boundaries and tend to seek unoccupied areas rather than risk invading another dog’s territory.

Disruption is aggressive behavior such as barking and posturing, and it occurs when an LGD interrupts the predator’s hunting behavior and “discourages” him from continuing his hunt. There is, however, no direct physical aggression.

When the first two behaviors don’t work, confrontation is used, and even then, the face-off isn’t necessarily lethal to the predator.

All that said, the first step in finding the right breed is to assess one’s needs. What is the LGD guarding? Sheep, cows, alpaca, goats, poultry, or a combination of animals? Will the dog be interacting with people – and in particular, children? What is the dog’s terrain? Will it be working in open fields, mountainous country, high country desert?  What is the climate?  Most LGD breeds were developed in specific regions ranging from Asia to western Europe to Asia, and choosing a breed that is accustomed to similar climate is just good common sense.  Some dogs prefer to stay with the livestock all the time, whereas others like to roam the perimeter. And how many dogs should one have? The general recommendation is one dog per 100 ewes or does, but flocks of 1,000 or more seldom have more than six LGDs. How about color?  Some meat and wool producers believe that because white dog breeds (the Great Pyrenees, Akbash, Maremma, etc.) were initially selected to protect small ruminants from coyotes, they may not be well suited to deterring larger predators like gray wolves and grizzly bears.

Rather than have definitive answers for different scenarios, we pose important questions and offer a few hints. Ultimately, it pays to do one’s research. Information on the Internet is vast, and narrowing down the particulars will result in a satisfied owner and a contented dog – a win/win for everyone.

The French routinely use the Great Pyrenees. They are typically one of the least aggressive LGD breeds, and tend to be very nurturing towards with children and young animals. This is a good fit for people who have small flocks and live in more populated areas, but if there is fencing, the dog may be tempted to dig out to satisfy its urge to roam. Great Pyrenees also bark more than many LGDs, and that’s something to consider if one has neighbors within hearing range.  A heavy coat makes this breed a poor choice in a hot and/or humid climate.

With a short, rough coat, however, an Anatolian Shepherd, however, does just fine in a hot climate. Anatolians like to roam (these dogs are quite fast and agile), and are described as being unmatched in their devotion to the herd. They aren’t particularly friendly toward humans, however, and some don’t even like being petted. Historically, Anatolians were often left alone with livestock for extended periods. (Ed note: Please refer to comment below for the feedback of an Anatolian Shepherd owner).

Working Pyrenean Mastiffs are suspicious of strangers, but will stand down when introduced to visitors. Like their Great Pyrenees “cousins,” PM’s are excellent with children, but unlike the Great Pyr, this breeds tends to bark less.

Another breed that excels with children is the Polish Tatra, an affectionate and gentle tempered breed that may be well-suited to smaller farms with frequent visitors. A heavy coat should be a consideration, as should its loud bark. As an aside, a Tatra’s alert is unique: The dog moves between the flock and the predator and alert barks, only attacking if the predator moves closer, and only if absolutely necessary. The Akbash shares this same quality.

Other LGDs reputed to do well with family members include the Bulgarian Shepherd Dog (aka the Karakachan), the Estrela Mountain Dog (another loud barker), the Bucovina Shepherd, the Mioritic Shepherd Dog, and the Kangal.

Breeds for cold climates include the Kuvasz, Tibetan Mastiff, Komondor, Great Pyrenees, Anatolian Shepherd, and Bulgarian Shepherd. An interesting “factoid” about cold weather and LGDs comes from the Ontario Ministry of Agriculture which offers this guideline for working dogs:  At about -32°C, medium-sized dogs (under 32 kg) start to take action against the cold by shivering or increasing their metabolic rate (burning energy to produce heat). Larger dogs, such as LGDs that weigh around 45 kg, can withstand even lower temperatures before reacting to the cold.” (-32C = -25.6F, 32 kg = 70.5 lb, 45 kg =99.2 lb)

For hot climates, consider the Bakharwal of India, the Akbash, Kangals, and Anatolian Shepherds.

A caveat: All the aforementioned breeds should be carefully socialized! There are those who believe that owners should never interact with their LGD, but we believe this is wrong. A Livestock Guardian Dog has to be socialized in order to handle him, feed him, medicate him, or treat an injury or illness. Unless an LGD is taught otherwise, people, and all other animals including other Livestock Guardian Dogs could be seen by the LGD as a threat to his livestock. Those interested in getting a working LGD may also want to give serious consideration to acquiring their dogs from breeders who breed from working parents.

The aforementioned information is intended mainly to inspire more questions in order to foster more research by anyone interested in getting an LGD to protect their stock.  While there are breed traits, dogs are individuals, and there is no “one size fits all” LGD breed. We strongly encourage readers to do their homework, ask questions, and then do more research.

It’s important to understand LGD behavior! We came across a fine example of why this is important: A ewe gives birth in the pasture, and the lamb is born dead, or dies shortly after birth. To protect the rest of the goats, an LGD might eat the dead lamb so that predators aren’t drawn to the herd. How easy it would be to misinterpret this situation. How many might see this scenario and initially think that the dog killed the lamb?  Another example: An LGD stays with a sick or lame animal, and what some might interpret as harassment is actually the dog is trying to separate the animal from the herd for the herd’s overall protection, or the dog trying to force a downed goat to move towards its herd for its own protection. A good LGD can sense if an animal is dying, or if it stands a good chance of survival.

We’d love to hear from owners of working LGDs. We’d like to learn what breed you chose, and why.

Photo of a pair of Estrela Mountain Dogs by Penny Glacki