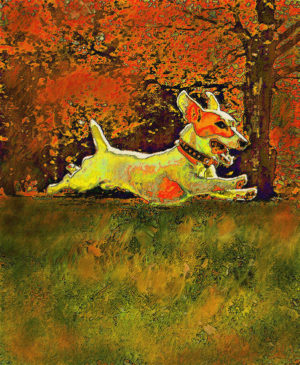 Outside the United States, the Russell Terrier is known as the Jack Russell Terrier (source: AKC), a breed so versatile that its limitations (within reason) have seemingly yet to be found: One Russell pulled over 2,000 pounds on a rail track in Virginia, and several compete in Treibball competition. A few are known to be hard working farmhands, and more than one has found stardom in front of a TV camera. They compete in agility, obedience, and rally, and “Macho” is a Dock Diving Champion. One Russell Terrier even holds the Guinness World Record for popping balloons in the least amount of time.

In the end, it can be very confusing, even for fanciers. We’re big fans of mnemonic devices (little tricks to help you remember something), and what we tell folks to recall is that the longer named Parson Russell Terrier also has longer legs than the Russell Terrier, and thus, is taller.

It seems to help some of us.