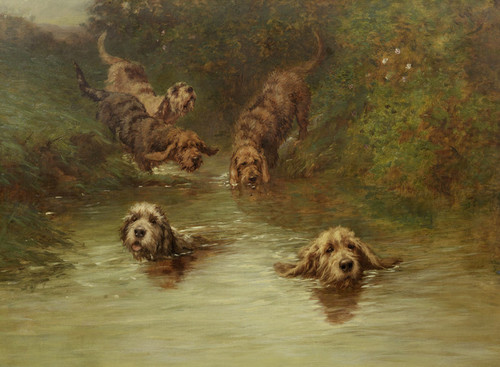 At one time, it was said that every sizable stream in Great Britain had otters, and as lovable as many of us find them now (who can resist critters that hold each other’s hands and juggle rocks?), otters have been, and can be, an absolute menace to fisheries,  stocked ponds, and in rivers. Otters, viewed as vermin in earlier centuries, put at risk the livelihood of men who depended on fish to feed their families. Hunting them became a necessity since fish was a dietary mainstay for much of the population in that time. Even now, otters can be problematic;  As late as 2009, fishermen and anglers were being asked by British wildlife surveyors to log evidence of otters, including pictures, so that authorities could determine how best to stabilize habitats.

As an aside, we found it interesting to learn of a study conducted in 2011 that found thirty-nine anecdotal reports of river otter attacks in North America, the majority of which occurred after 1980. Indeed, seventeen attacks on people were reported in the 2000s. Who knew.

In King John’s time, it was forbidden to catch otters by any other means than hunting with hounds, and we have a living legacy of those times in the endangered Otterhound of today. King Edward II owned twelve Otterhounds, and Edward III hunted with these “water dogs” in the waters of north Wales. William Melbourne was Henry IV’s otter hunter, and the activity eventually passed to his descendant, Elizabeth I, who also owned a pack of Otterhounds and was the first “Lady Master of Otter Hounds.”

The earliest illustrations of the dogs used to hunt Otters were found in French documents of 1338 and 1378, and are among the earliest illustrations of any kind of hunting hound. In 1919,  National Geographic described Otterhounds as a “Bloodhound clad in the roughest of deerhound coats,” though it seems whomever wrote the description didn’t attended the show in 1907 when the first Otterhound was exhibited at an AKC dog show. Though Bloodhounds are in the breed’s ancestry, by then, Otterhounds had their own breed characteristics.

The first AKC-registered Otterhound was from England, “Hartland Statesman” in 1910. The first litter was bred by Dr. Hugh Moat. From the litter of the parents, Bessie’s Courageous and Bessie’s Countess, came the first Otterhound AKC champions.