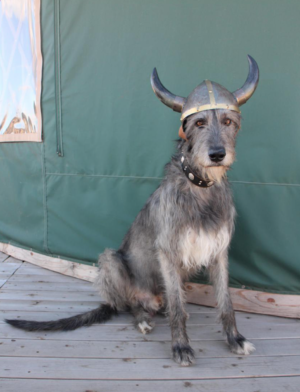 In the movie, his name was “Rekkae,” and if you scroll down to the video clip, you’ll spot the dog within the first 35 seconds of the movie, “The 13th Warrior:”

The 13th Warrior was terrific movie (and terrifically bloody). Some said at the time of its release that it was also historically inaccurate for having cast an Irish Wolfhound as the dog owned by a Norseman named, “Buliwyf,” in the year 922 A.D.

The first recorded Viking raid was in 795 on Rathlin Island off the coast of Northern Ireland. Subsequent forays took the Vikings all along the western coast of the Emerald Isle. The huge dogs were taken back to the Scandinavian lands, home to the Vikings, as confiscated treasure.

There were many references in the Icelandic Sagas of these large hounds, and indeed, a memorable quote about the Wolfhound comes not from a Celt, but from a Viking lord, Olaf, in Njal’s Saga, a 13th century tale of blood feuds in the Viking era. Olaf told his friend, the doomed Gunnarr, “I want to give you three gifts: a gold bracelet, a cloak that once belonged to King Myrkjartan of Ireland, and a dog I was given in Ireland. He is big, and no worse follower than a sturdy man. Besides, it is part of his nature that he has man’s wit, and he will bay at every man whom he knows is thy foe, but never at thy friends; he can see, too, in any man’s face, whether he means thee well or ill, and he will lay down his life to be true to thee . . .”

Vikings cremated their dead on an open funeral pyre, and unfortunately for the dogs, they followed their masters to Valhalla, the great hall in Norse mythology where heroes killed in battle went as their reward (think heaven). In the Gokstad burial mound (c. 900 AD), bones of eight large sighthounds were buried on both sides outside the ship.

As for the Irish Wolfhound in the movie, his real name was “Connor,” and he was originally a wheaten. Movie producers thought his natural color would have stood out too much, while gray would have blended into the background too much. The solution was dye Connor a shade of red. He was owned by Pauline Weisberger who at the time lived in British Columbia, Canada