Ask why the Kardashians are famous, and you might be told that they’re famous for being famous. In reality (ha, a pun because their fame is due to their reality show, “Keeping Up with the Kardashians”), some may wonder why they were interesting enough to warrant their own show in the first place.

A famous parent helps, and two famous parents help even more.  Throw in a famous friend, add an explicit video tape, and there you go. Celebrity.

The family patriarch (and father to Kourtney, Kimberly, Khloe, and Robert) was Robert Kardashian, already a successful attorney when he defended O.J. Simpson in 1994 in a sensational and very public trial.  After Robert and the kids’ mother, Kris, divorced in 1991, Kris went on to marry Olympic gold medalist, Bruce Jenner, now Caitlyn Jenner.

More attention came when Kim Kardashian became Paris Hilton’s stylist, and the pair were often seen partying together. Then came 2007. A highly personal (read: not family friendly) tape that Kim made with her then-boyfriend Ray J, was “leaked” (the rapper posted it on line), and the 100 million views it got made her a pop culture phenomenon.

The family didn’t miss a beat. That same year, Keeping Up With the Kardashians hit the airwaves. Now in it’s 17th season, it has become one of the longest-running reality television series ever, and the global public opinion and data company, YouGov, ranked it the 17th most famous contemporary TV show in America.

Some people have never watched the show (ok, us), but it’s hard to avoid knowing of the Kardashians. Dog loving Instagram followers especially note that the Kardashians are big dog lovers, though critics point out that there have been dozens of Kardashian-Jenner pets who have come and gone over the years—often without explanation.

Of all of Kardashians, Kylie Jenner (named the world’s youngest self-made billionaire in 2019), has the most animals in her home (and she may be the best owner of them since she still has them all) but more on her in a minute as we review the rest of them.

There’s been a Chihuahua, and a Great Dane named Blu; a Labrador Retriever named “Gabbana” was an integral part of the early seasons until his passing. Khloe took in a Boxer (named Bernard or B-Hops) when she was married to Lamar Odom, but reportedly, she rehomed the dog when she moved into an apartment that didn’t allow large dogs. Kendall and Kylie got two chocolate Labs for Christmas back in 2011 whom they named Louis and Vuitton, but the public hasn’t seen the dogs since 2012. The Kardashian-Wests (that’s Kim Kardashian) have two Pomeranians, Kendall Jenner frequently shows off her Doberman Pinscher on Instagram, and Kourtney showed off her new Golden Retriever puppy on Instagram last month when asked her followers to help name the youngster.

There have been other dogs, as well, some rescues, and some mixed breeds, but they seem to come and go, and it’s hard to keep up. 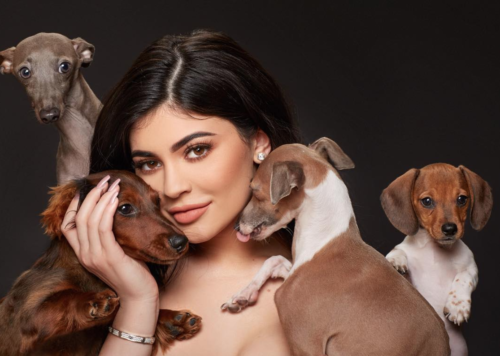 As for Kylie, she has made it clear that her pets are members of the family,  Her Italian Greyhounds, Norman and Bambi, make regular appearances on Jenner’s social media sites (as well as their own), and Italian Greyhound, “Sophia,” joined the family in the fall of 2015. At some point, there was the Bulldog “Rolly,”said to be a $50,000 gift, though he appeared to belong to Kylie’s boyfriend Tyga. In 2016, “Odie,” a longhaired Dachshund joined Team Kylie. As far as we can tell, “Wesley,” a Chihuahua x Dachshund mix, is the most recent addition to the other dogs, chickens, and bunny that Kylie has.

In 2018, Kylie had a custom-built house constructed for her dogs. It has air conditioning, a white fence, and a mini porch.

Keeping up with the Kardashians isn’t easy.