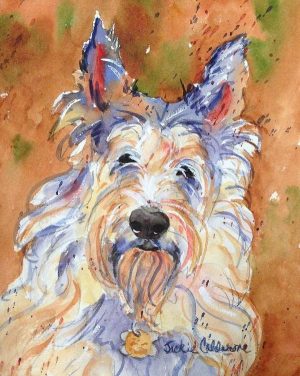 That the Berger Picard is the oldest shepherd breed in France is accepted as fact by some cynologists. While no one is certain of its earliest origins, there are those who believe the breed arrived in France in the 9th century after the Celts, and other cynologists suspect it may have been brought to northern France even earlier, around 400 B.C.

Berger Picards appeared at the first French dog show in 1863, but they were judged in the same class as the Beaucerons and Briards.  In 1898,  there was proof that the Picard was a recognizable breed, but despite the antiquity of the breed, when the Picard participated in a dog show for the first time as its own breed in 1899, the eminent judge refused to recognize them because of their rustic, mixed breed look.

Despite this snub, the breed’s first standard was drafted in 1912, and in 1925, the French Shepherd Dog Club made the breed official. Though the breed was flourishing before WWI,  the war depleted breed numbers, and after World War II, the Picard was in outright danger of extinction. From the remaining specimens, the breed was recovered in 1953, and in 1959, the Club Les Amis du Berger Picard, the French Parent club for the Berger Picard, obtained definitive recognition in 1959. A new breed standard was approved by the Société Centrale Canine in 1964, and for the next thirty years, Jacques Sénécat became the breed’s champion both as the club’s, and as the author of the book, “Le Berger Picard d’hier et d’aujourd’hui“published in 1979.

Image: Berger Picard by Jackie Calderone is available as fine art and in home decor and lifestyle items here