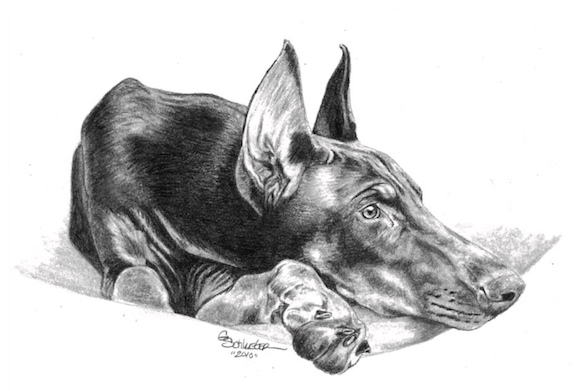 Occasionally, we’ll talk about something that seems far afield of our mandate to celebrate purebred dogs, but in truth, the subtext of our mandate is education.  Sometimes, that edification takes the form of revealing not just what is a purebred dog, but what isn’t. We’ll also touch upon terms one might encounter in the course of looking for their next dog, and if that dog is a Doberman Pinscher, then “Warlock Doberman” may show up during research.

It’s unfortunate that a beautiful Doberman Pinscher named Am/Can/Cuban Ch. Borong the Warlock, CD should have his name used as a marketing tool today because for a time in the 1960s, this dog the top winning Doberman of all time. He sired 25 AKC champions, and they included three Best in Show winners. The phrase, “Warlock Doberman,” became synonymous with a truly fine dog, and reputable breeders were proud enough to have him in their pedigrees that it was a “selling point” in placing puppies. Warlock won 230 Bests of Breed, 30 Specialty show “bests,” six all-breed Bests in Show, and sixty-six Working Groups. He was the only Doberman Pinscher to have won the Doberman Pinscher Club of America National Specialty three times. And now we’ve given ourselves goosebumps.

In the 70s, the breed had became very popular, and sadly, there were those who saw in its sleek elegance the potential to be presented as a menacing-looking guard dog. Irresponsible breeders focused on producing larger Dobermans, and to get there, they bred their Dobermans to larger breeds such as the Great Dane and Rottweiler. Building on Warlock’s legendary fame in the previous decade, unscrupulous breeders billed their puppies as “Warlock Dobermans” without having a clue about the actual dog, let alone the Doberman breed standard. The name came to be used to refer to a significantly larger Doberman Pinscher, which is to say a grossly oversized one. Some “breeders” added to the hype by claiming that Warlock Dobermans had a special look in their eye, or a unique body build or color. Even today, it remains a marketing tool among substandard breeders with the gall to overcharge for puppy that won’t meet the breed standard.

We hope that by reading this, someone might be dissuaded from buying such a dog. Because of its size, Warlock Dobermans may be vulnerable to issues that include weight putting strain on joints. A heritage breeder invested in their breed will not breed outside the breed standard.

Image: “The Doberman” by Genevieve Schlueter (which is not a Warlock Doberman) is available for purchase here.