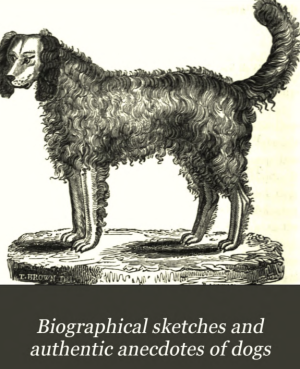 Consider the following description of a nearly 200 year old book about dogs:

“This work has been selected by scholars as being culturally important and is part of the knowledge base of civilization as we know it…Scholars believe, and we concur, that this work is important enough to be preserved, reproduced, and made generally available to the public.”

The book is “Biographical Sketches and Authentic Anecdotes of Dogs,” by Thomas Brown. Why is it important?

First, let’s learn about the author.

Captain Thomas Brown was a British naturalist and malacologist (someone who studies mollusks). He was born in Scotland, and at the age of twenty, joined the Forfar and Kincardine Militia. By the time he turned twenty-six, he had risen to the rank of captain. Thomas became interested in nature, but when his regiment was disbanded, he bought a flax mill. His bad luck with the mill became our good fortune: It burned down before he had a chance to insure it, and needing a way to make a living, Thomas started to write books about nature.

He wrote about butterflies, sphinxes and moths. He wrote about shells and mollusks (in 1842,  a shell was even named after him: Zebina browniana). He wrote about collecting, preparing and preserving objects of natural history. He was as known for his illustrations as for his writing, and the images you see here were by his hand.

In 1829, he brought out Biographical Sketches and Authentic Anecdotes of Dog, the first dog book to be published in Scotland. 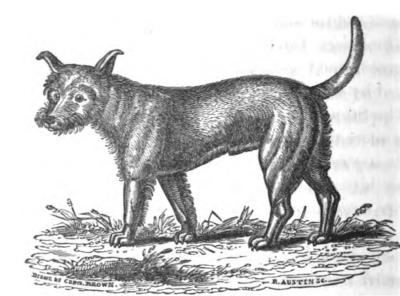 The drawing heading up the chapter on Scotch Terriers

When Thomas wrote, “The name Terrier seems to be derived from the avidity with which he takes the earth in pursuit of all those animals which burrow,” he triggered another bit of development that helped identify several terrier breeds by name according to their type (this according to John T. Marvin, author of “The Book of All Terriers”).

Thomas set off this chain of events by writing in the same book, “There are two kinds of Terriers, the rough-haired Scotch and the smooth English.”

This is rather significant. Up until Thomas wrote this, other writers had simply referred to these dogs as nameless varieties of terrier without noting where they came from or in what kind of environment they lived and worked. Brown also divided the “Scotch” branch of terriers into three more varieties whereby four well defined breeds were named.

“…from the many characteristics peculiar to itself, [speaking of the terrier], we would almost be induced to consider it a primitive race. Certain it is, that this dog has been for many ages assiduously cultivated, and trained to the particular sports to which nature seems to have so well adapted him. To the fox, hare, rabbit, badger, polecat, weasel, rat, mouse, and all other kinds of vermin, he is a most implacable enemy; he has also a strong natural antipathy to the domestic cat.”

In the section on the Scotch Terrier, readers will likely recognize his description of the ancestors of Westies, Scotties and Cairn Terriers, but Thomas addresses not only the Scotch Terrier in his book, but the English Terrier, South American Terrier, and Bull Terrier. Furthermore, he covers pointers, spaniels, and setters, as well as the Lurcher, Turnspit, Ban-Dog, Pug-Dog, and something called the Mopsie, “a variety of the German pug-dog.”

For cynologists, dog enthusiasts, and certain breed historians, this is a worthy read. Because the book is in the public domain in the United States of America and may be freely copied and distributed, it can be freely read here.