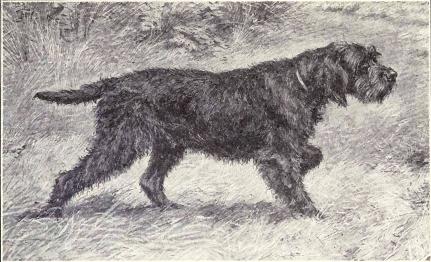 A “griffon” breed you won’t find on any of the aforementioned registries is the Griffon à Poil Laineux (or wool-haired standing dog’), also known as the Griffon Boulet. Said to have once been recognized by the FCI (formerly in Group 7, Section 1.3, standard no. 174 ), one of our favorite dog authors, Craig Koshyk, reports that the first dog ever entered into the LOF, the French stud book, was a Griffon Boulet named, “Marco.” In fact, the next nine dogs registered in the LOF were also Griffon Boulets.

The breed was once very popular, and was even said to have been used by Eduard Korthals to create his Griffon Korthals, or what we in the US know as Wirehaired Pointing Griffon. In fact, Korthals was known to have owned a six-year-old Griffon Boulet bitch whom he took with him to Germany when he was hired to train Prince Albrecht’s Pointers.

The first detailed description of the Griffon Boulet (which was sometimes called the “Wooly Pointing Dog”) dates back to 1884 from the “Schweizerischen Hundestammbuch”, Volume 1 written by Neukomm, but the breed itself was starting to be developed almost fifteen years earlier by Emmanuel Boulet who, unlike his contemporary, Eduard Korthals, didn’t want to invent a new breed, but rather to save and improve upon an old one, the French Longhaired Pointing Griffon.

His Griffon Boulet shared many characteristics with the Korthals Griffon,but the coat was much longer and not as hard in texture. This was a decidedly rugged, coarse-looking dog clearly meant to work, and the breed became known throughout Europe; during his trip to France in 1887, the Grand Duke Nicolas of Russia visited Emmanuel Boulet’s kennel to see his Griffons. Another time, the press reported that when the then President of France, Marie François Sadi Carnot, presented Boulet with a medal for his work, Boulet offered him a vest (or sweater) which had hair from “Marco” woven into the wool or fabric (Boulet had, after all, founded a weaving business in Normandy).

We have no explanation as to why a breed that is considered to be extinct still shows up on the Internet in the forms of ads for dogs. Either the breed isn’t extinct, or the name has been used for other breeds. Whatever the end result for the breed, Boulet seems to have lost his fervor for it if a letter written by Prince Albrecht that was published in the sporting press is to believed. Boulet came to feel that hisdogs were, “too long- and soft-haired as a result of crossbreeding and he wants only prickly-haired dogs.”

After Boulet’s death in 1897, a few breeders tried to carry on his work, but just after WWII, the breed was gone entirely. The FCI continued to publish the breed standard but dropped the Boulet Griffon from its list of recognized breeds in 1984. Someone named Philippe Seguela tried to recreate the Boulet and came quite close to the original, but in the early 1990s, Seguela abandoned the project.