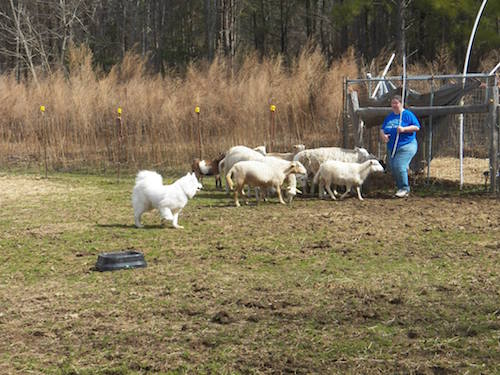 It was Dr. Theodore Woodward, a professor at the University of Maryland School of Medicine, who in the 1940s instructed his interns: “When you hear hoofbeats, think of horses not zebras.” In fact, the “zebra” expression has become slang for arriving at an exotic conclusion when a more common explanation is likelier.

One might be accused of committing a “zebra” if, when hearing “herding dog” they think “Samoyed” before thinking Border Collie, Australian Shepherd, or even Puli, but they would be accurate because since 2011, the Samoyed has been eligible to participate in AKC Herding Instinct Tests.

It makes more sense when one realizes that the Samoyede were a nomadic people who kept herds of tundra caribou, or reindeer, and they used their versatile dogs to herd the stock. A Samoyed had to be able to tend and drive, and when a reindeer straggled off, fetching was called for, as well.

Today’s Samoyed is more of a “weekend herder,” but make no mistake, the dogs can do the job. The first Samoyed to win an AKC Herding Title did it in 1992 (UCDX MyTy’s Glinda Bruja Del Sur,UD,PT,CGC,ASCA CDX,SCD,HIC,TT,TDI,WS). Since then, a Samoyed has gone High in Trial at an AKC Herding event (CH Shada’s Dancer of Tarahill, CDX, HS in 1994), earned an AKC Trial Level Herding Title (CH Omega’s Acrtic Outlaw, HS, HTD-1s, STD-s, HIC, CGC, TDI in 1994), and won an AHBA Herding Championship (HTCH, U-CD WHITE WOLF WILD & FREE, CD, HI, OTD-s,d, WSX, TDI, TT in 2000).

All that said, the Samoyed Club of America concedes that finding a Sammie that exhibits more than a passing interest in herding is a bit “serendipitous at best,” and that today’s Sammies work because “they want to please their owners, or because they still retain some of the primitive pack hunting urge.” We weren’t able to find how many Samoyeds hold a herding title as of 2018, but the accomplishments of the aforementioned dogs prove it can be done, and is!