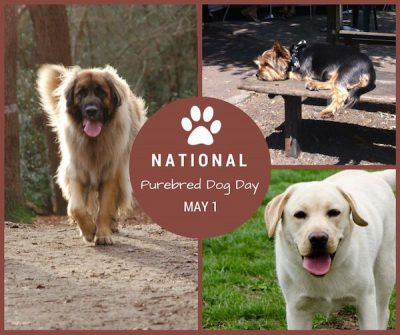 Tip #5 could be subtitled: “Do ‘they’ hate breeders more than ‘they’ love rescue, or the other way around?”
The first four tips we’ve shared so far are a few on-line “toys” you can play with to make stand-out social media posts for May 1 – National Purebred Dog Day. You are, however, going to need more.
National Purebred Dog Day was created at a time of intense polarization in dog ownership, and many of you are experienced with how this sounded when “they” said:
……….and on it went.
To admire the beauty of a purebred dog is to admire balance, but balance was sorely lacking in the conversation about dog ownership, and the voice of purebred dog owners was being shut out.
In the warm embrace of a website and Facebook page that celebrates purebred dogs, it’s hard to believe that among us are responsible people who have been shamed for owning a heritage bred dog, preservation breeders who have feared for their safety, and individuals who have felt the effects of bad animal legislation, the self-righteousness of an adopt-don’t-shop zealot, or an animal control officer with an agenda.
The pendulum swings, it always does. National Purebred Dog Day was created to help the pendulum find balance a little bit quicker, and by including our voices.
On May 1, you may encounter people opposed to purebred dogs (“elitism”) or the ownership of any dog not acquired from rescue or a shelter. From now until May 1, we’ll be sharing a few tips to help you counter them.
A common objection will be why purebred dogs need their own “day,” or “what about mutts?”
National Dog Day was created in 2004;
National Mutt Day was created in 2005
National Puppy Day was created in 2004 (all of these created by the same person, by the way).
National Purebred Dog Day was finally created in 2013 and officially recognized first by the State of Colorado in 2015. Several months ago, it was introduced to the United States Congress with the backing (and effort) of the AKC (see the resolution here).

If and when someone says to you, “What about the mutts?” Answer them with the dates above.