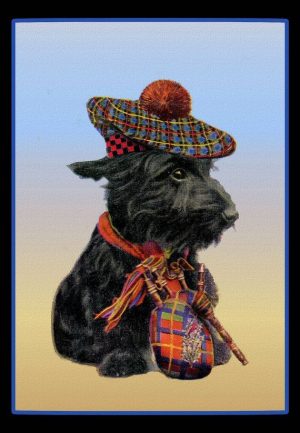 Readers of a certain age might remember an old game show called, “To Tell the Truth.” Four celebrity panelists were presented with three contestants all claiming to be the real person whose unusual occupation or experience described by the show’s host at the beginning of the show. With questions, panelists tried to ascertain which contestant was the “real” person. It was a popular show that ran from 1956 to 1978, and we’ve heard rumors that it’s been recently resurrected.

Exhibiting a Scottish Terrier in the mid 19th century had to be a bit like that game show in that several breeds laid claim to being “Scottish Terriers;” they included Skye Terriers, Westies, Cairn Terriers, Dandie Dinmont Terriers, and even Yorkshire Terriers. Needless to say, this didn’t go over well with the fanciers of the breed we know today as the Scottish Terrier.

To be fair, all dogs in Scotland that worked underground were, historically speaking, called “Scotch Terriers.” As far back as the 16th century,  Scottish Roman Catholic bishop and historian, John Lesley, wrote in his ‘History of Scotland: “.. a dog of low height, which creeping through subterraneous burrows, routs out foxes, badgers, martens and wildcats from their lurking places in dens.”

In the 1800s, many held the opinion that the name, ‘Scottish Terrier,’ referred to all terriers originating in Scotland.

Scottish Terrier fanciers of the day didn’t agree, and they objected vociferously. They spared no words in their complaints to the Live Stock Journal about what a real Scottish Terrier was, and descriptions were provided by people writing under pseudonyms, such as “Strathbogie” and “The Badger.” The debate raged on at such a ferocious pace that journal editors threw up their hands and said, “Enough!” The publication issued the following statement: “We see no use in prolonging this discussion unless each correspondent described the dog which he holds to be the true type.”

It worked, but only for a while. In January, 1879, “Strathbogie” brought the matter up again by sharing his idea of what a Scottish Terrier should be: The Scottish Terrier should “be in colour either grey or iron grey; dark, with brown muzzle ; legs brown or dark fawn, no white about them. His head should be fairish long, strong muscular jaws ; cars small, dropping to the front ; body lengthy ; legs stout and well covered with muscle ; tail carriage, houndhke ; length of coat not over, if possible, 3 inches, which ought to be hard and dense ; weight from 12 lb. to 18 lb., not more, though I have known good specimens a trifle over this weight ; temper good, both with man and dog. Scotch Terriers are far from quarrelsome ; they are kind, quiet, and fond of each other. . . . I am astonished the K.C. does not give us a class for this famous breed.”

“Strathbogie” was actually Captain Gordon Murray, a fancier who had developed a careful breeding program to establish Scottish Terrier type, and “The Badger” was Sir Paynton Pigott, M.V.O. Their perseverance lead Mr. S. E. Shirley, then President of the Kennel Club, to create a couple of classes for their breed at the Kennel Club show at the Alexandra Palace that same year.

Murray’s description stuck until 1880 when another Scottie fancier,  J.B. Morrison, drew up an official standard. Two years later, Scottish Terrier Clubs were formed in both Scotland and England. J. H. Ludlow, who had founded the Scottish Terrier Club of England, bred or owned many of the breed’s earliest champions including a bitch named, “Splinter II.” Because most present-day Scotties trace back to her, Splinter has been called the “foundation matron of the modern Scottish Terrier.”